The editor of an award-winning daily newspaper has stood down after 31 years in journalism to be replaced by her deputy.

Emma Turton worked her last day at the Burton Mail, where she has spent the last 15 years, on Friday.

Emma, who was the Mail’s digital editor for four years and deputy editor for five years before taking on the editorship three years ago, said she decided in the summer to step down.

She remained in charge “to help bed in a number of structural changes”, but her erstwhile deputy Julie Crouch has now stepped up to the editor’s chair. 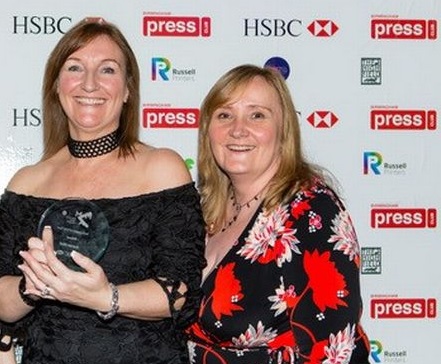 Emma said she would leave “on a real high” after winning Newspaper of the Year title at the Midlands Media Awards last month – describing it as her “absolute highlight”.

She added: “I have had the most amazing time as editor here, and in newspapers in general.

“I have met, worked with and learned from some talented and amazing people, been part of some very successful appeals, especially the Feed Our Families food bank campaign which has now been running for four years, and covered some incredible and inspirational stories.

“But, after 31 years in the industry, I’ve decided to leave, take a few months out to spend a bit more time with friends and family and then look for a completely new challenge.”

Julie began her career 30 years ago at the Ilkeston Advertiser, later moving to the Derby Telegraph and then editing several weekly titles in Derbyshire for six years.

She moved to the Burton Mail as deputy editor just over three years ago, her second stint at the paper, having previously covered business, worked on the newsdesk and as a sub-editor over a 13-year period.

Julie said: “I am delighted to have the chance to take the reins at the Burton Mail. As deputy I have played a pivotal role in the small but dedicated and hard-working team.

“I plan to continue to build on the solid foundations which have already been laid and keep doing what we do best here – punching above our weight.”