A regional daily which has campaigned for better ownership of a local football club has welcomed the prospect of it changing hands.

Newcastle United owner Mike Ashley announced on Monday night he was putting the club up for sale, almost four years after city title The Chronicle first published a front page message to him after its journalists were banned from home games over coverage of a fan protest.

The Chronicle has since made other front page pleas to Mr Ashley, and last month demanded he set out his vision for the club’s future after turning down repeated requests to talk to its journalists.

Chief sports writer Lee Ryder got an early tip that Mr Ashley was officially planning to announced the club was up for sale, and The Chronicle broke news of the statement in a liveblog on its website. 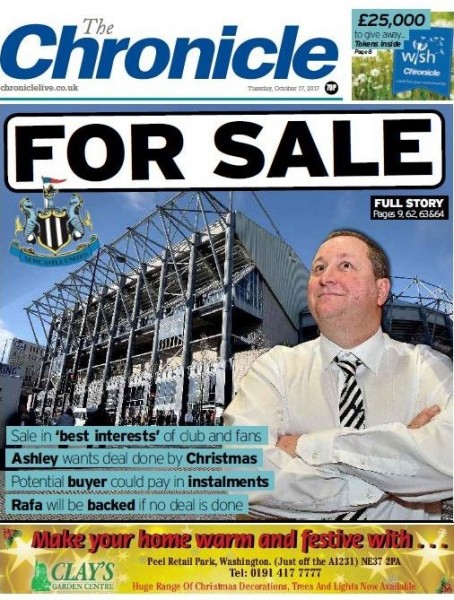 How The Chronicle covered the announcement on Tuesday’s front page

The newspaper’s Newcastle United editor Mark Douglas said: “Mike Ashley’s Monday night announcement that he was putting the club up for sale was the latest twist in a decade-long story that we’ve been covering at the Chronicle.

“Our Chief Sports Writer Lee Ryder got an early tip that the statement was coming so we were able to go straight into a liveblog breaking news of the statement and then starting to answer the questions that the supporters were asking about its significance.

“Throughout the summer we’ve been reporting that the club was unofficially for sale but the new statement seems to confirm that he now shares the opinion of many of the supporters that Newcastle United needs a new direction. Our coverage of Mr Ashley has always focused on one thing: why he doesn’t see what an opportunity he has in owning the club.

Our ‘Read This Mr Ashley’ front page in 2013 was an attempt to show him what the club means to its city – and if he does sell Newcastle, it would be fantastic to see someone replace him who realises the potential of the club.” 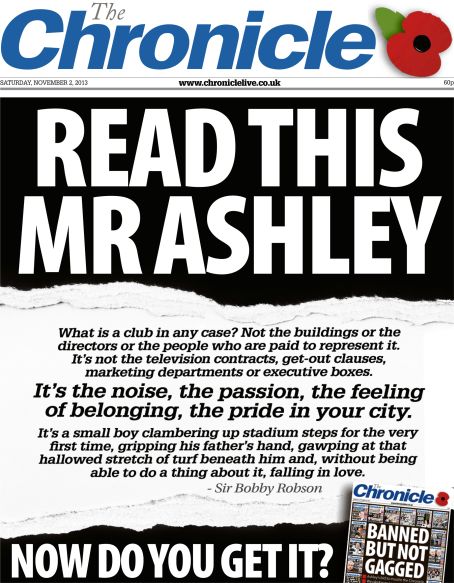