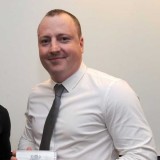 An award-winning chief reporter has stepped up to edit a regional daily after his predecessor took voluntary redundancy.

Gavin has worked on the Express since 2006, initially as a senior news reporter and later moving to focus on crime four years ago.

He was promoted to chief reporter around two years ago.

Cheryl had served as editor since 2015, when she replaced John Hutcheson after he took voluntary redundancy.

Said Gavin: “My predecessor Cheryl McEvoy turned the Paisley’s Daily Express’ fortunes around, shoring up circulation and giving the title a fresh sense of purpose.

“Stepping into her shoes felt a little like David Moyes trying to follow the footsteps of Sir Alex Ferguson, but fortunately results have gone our way so far and with the talented team I have around me, I’m excited about the future of the paper.”

Gavin started his career at the Dumfries and Galloway Standard in 2001, where he worked as a junior reporter and then a reporter.

Last year he won the Media Scotland Regionals Journalist of the Year title.