A weekly newspaper has celebrated its 200th anniversary by publishing a special 24-page supplement and holding a buffet lunch.

The Montrose Review was founded in 1811 as the Montrose, Arbroath and Brechin Review and Forfar and Kincardineshire Advertiser and the Johnston Press title is believed to be the second oldest weekly paper in Scotland, behind the Ayr Advertiser.

It marked the anniversary last month with a buffet lunch for staff, local councillors, customers and business owners at a hotel in the town. 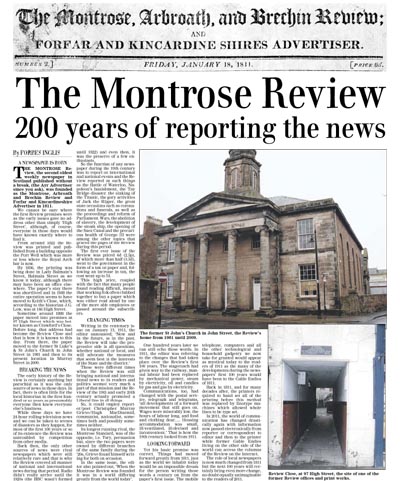 He said: “I feel priviledged to be part of the team that produces the Montrose Review on the occasion of its 200th anniversary.

“It is truly humbling to be involved with a newspaper which is the second oldest in Scotland and has reached its bicentenary.

“I wonder if James Watt believed that the newspaper he founded would still be in existence two centuries after he put the first issue to bed.

“The ethos of the Review is no different to what it was two centuries ago. Bringing local news to local people is what we do and what we will continue to do.

“It is a vitally important function and gives every journalist a great deal of satisfaction as that is the reason you get into the business.”

At the lunch, senior sales manager Linda Ruxton was presented with a bouquet of flowers to recognise her recently-completed 25 years’ service with the company.