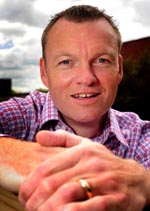 A columnist for a regional daily who became an ambassador for cancer charities after surviving the disease is calling on newspapers to be part of his attempt to set a world record.

Chris Geiger, who writes columns for the Bristol Evening Post, was given three months to live after being diagnosed with cancer at the age of 23.

19 years later, he is an ambassador for cancer charities and spends most of his time campaigning and raising awareness of the disease.

And he is now bidding to set a Guinness World Record for having an article published on the same day in as many daily publications as he can.

His record attempt will take place on 4 February, which is World Cancer Day, and to achieve the record, the article must be at least 1,000 words long and the newspapers involved must be dailies with audited circulations of more than 30,000.

Chris said: “This is a great opportunity for me to get across my message about cancer. I simply urge editors to take a look at the column and, hopefully, publish it on February 4.”

Already newspapers in the USA, Ireland, Scotland, New Zealand, Phillipines, Australia, Gibraltar and Wales have signed up to his record bid and Chris wants more UK papers to get involved.

Bristol Evening Post assistant editor Richard Coulter said: “Chris is a fantastic guy who writes intelligently and also from the heart – with the benefit of some amazing experiences.

“His columns in the Evening Post always provoke debate and feedback and I know he is lining up something special for February 4.

“He just needs British editors to give him support and column inches.”

Chris makes no charge for the column, although any donations would go to cancer charities.