A weekly newspaper editor is urging news chiefs across the country to get on board with a campaign to save the fishing industry.

Jon Stokoe from the Whitby Gazette has issued the rallying call to editors at fellow coastal papers to join forces to launch petitions against tough EU restrictions placed on fishermen.

His paper started its Fight For Our Fleet campaign in October last year to save Whitby’s fishing industry and since then, it has been rolled out to Johnston Press sister titles the Scarborough Evening News and Bridlington Free Press.

The campaign in North Yorkshire has attracted 3,000 signatures from across the world, has arranged meetings between fishermen and politicians and has won the backing of celebrity chef Hugh Fearnley-Whittingstall.

Jon’s call to editors comes after the Hastings and St Leonards Observer started a campaign this month to get a fairer deal for struggling fishermen on the South Coast, with the paper now saying it is keen to join forces with the Gazette. 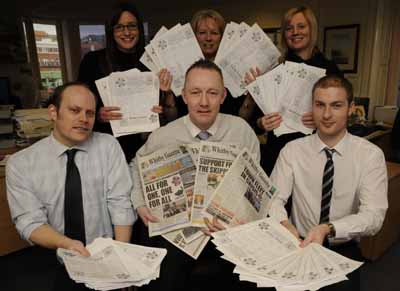 He said: “Fishing is the lifeblood of Whitby and has played such an important part in its history, as well as being an essential part of everyday life for generations of families.

“Our remaining fishermen have really been struggling of late but have kept battling on thanks to their Yorkshire grit and their determination.

“We thought it only right to try to support them – whether we can make a difference who knows, but it is only right we try.

“We have already had success in setting up meetings and helped bring funding to the harbour – now I hope other editors from across the country rally behind our cause.”

The Whitby Gazette plans to deliver all the petitions to Downing Street and Brussels later this year and hopes tens of thousands of names can be added to the voices of its readers.

It is also planning ‘Fish Friday’ events on Good Friday when apprentices from Whitby and District Fishing Industry Training School will hand out leaflets raising awareness of what is happening as well as collecting more signatures, while car stickers and banners will also be displayed.

Hastings Observer chief reporter Richard Morris, who is leading the paper’s Fairer Deal for Fishermen campaign, said: “I am sure there are lots of papers out there who work in communities affected by the quotas.

“Perhaps together we can have a stronger voice and finally succeed in hammering home the severity of the situation.

“Our campaign has been running for just over a week and we have already had nearly 1,000 cut out fish returned to us by readers. If every other paper with a fishing fleet could do the same, it would send a real message to decision makers.”

Any newspapers interested in joining the campaign should email jonathan.stokoe@yrnltd.co.uk.