A regional daily has published a special edition to mark the funeral of one of the town’s most famous sons.

The Bolton News produced seven pages of coverage of the funeral of footballing legend Nat Lofthouse, including a wraparound photo of the crowds who had turned out to say goodbye to him on Wednesday.

Thousands of people lined the streets outside Bolton Parish Church for the funeral of Lofthouse, who was a former Bolton Wanderers and England centre forward, including well-known figures from the world of football Sir Alex Ferguson and Sir Bobby Charlton.

A well as the wraparound, featuring a striking photograph taken by picture editor Richard Rollon, news and sports writers worked together to cover every aspect of the ceremony, which was also streamed live on the paper’s website. 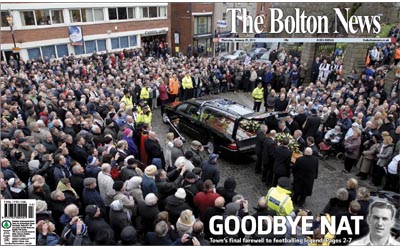 Editor-in-chief Ian Savage said: “Nat was Mr Bolton to so many people in the town, and was the perfect sportsman and a real gentleman.

“The huge number of people who took the time to line the streets to say farewell showed just how much high regard he was held in by the people of Bolton.

“We needed to do something special for the occasion and we certainly managed that.

“This was all thanks to the effort and commitment shown by my team who made sure all the angles were covered, in both words and pictures.”