A free weekly paper operating in a Yorkshire seaside town will cease publication at the start of next month, regional publisher Johnston Press has announced.

The move was announced in a notice published in the Free Press which said the Gazette and Herald would publish its last edition on 1 February.

It said the change meant staff would now be able to focus on improving the paid-for title.

The notice said: “The change means we can put greater effort into your main newspaper, the Free Press. This will provide a better package for all your commercial needs, and all your contacts remain the same.”

The move comes after Johnston Press confirmed earlier this month that two free titles on the South Coast, the Eastbourne Advertiser and Worthing Guardian had been mothballed pending an upturn in economic fortunes.

Johnston Press has confirmed the closure of the Gazette and Herald but declined to comment further. 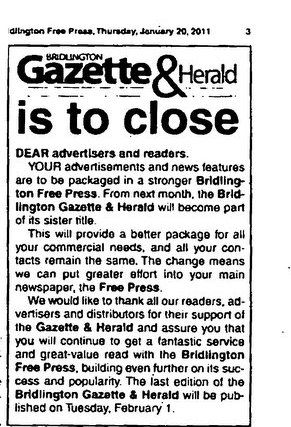