Worthy of this week’s headline and intro was the innovative use of Post It-style sticky notes on the front page of The Sentinel on Wednesday 5 January.

I’d never seen this before, and had a double-take in the Stoke-on-Trent newsagent before realising this was no mistake and that these removable ads were on every cover. 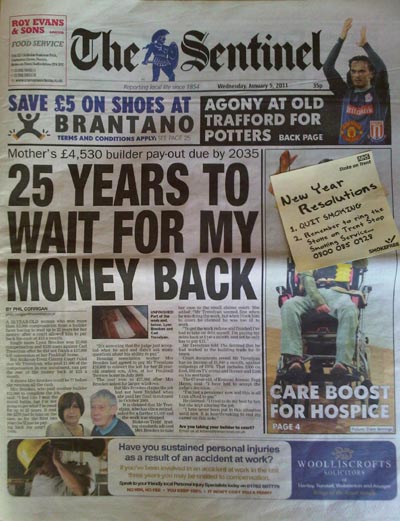 I reckon this bright yellow note would have been noticed and therefore read by every purchaser of the paper, a mass reaction hopefully logged by the local NHS ‘Stop Smoking’ hotline.

The sticker was quite easily removed – another reason to look – and once gone it’s literally the front page ad that takes up no space, an ingenious revenue development that might quickly catch on.

Perhaps you’ve already had one on the front of your paper – do tell if so – but the only other example I could find in an admittedly quick internet search was via an advertising agency in Louisiana, USA.

Sticker removed, I settled down to a good half-hour read of The Sentinel, whose traditional, copy-heavy content I really enjoyed.

’25 YEARS TO WAIT FOR MY MONEY BACK’ was the splash, the consumer-related nightmare of a building extension gone wrong making me want to read the entire 18 par story on page one.

I recognised that this was what I liked and what is too-often missing in so many regional dailies these days: copy of a decent length, telling both side of a story in balanced detail.

Editor Mike Sassi obviously believes in giving each lead story the space and time to breathe, containing the fine detail that readers always want. My other favourites were:

Other stories that I initially felt were weak for page leads actually ended up far more interesting than they might have as shorts, simply because of the local quotes and detail they included.

For example, ‘Fast-food shop plan under fire’ on page 11 could have made a dry five-par stick in many papers, but four detailed comments from neighbours plus a bit of planning history made it commendable piece of ‘local, local’ journalism.

A tight design and regular use of ‘In brief’ columns resulted in not too low a story count in this 44-page paper, despite the length of page leads.

There were a total of 146 reads on 21 news and features pages, plus a spread of TV listings and a puzzles page, with another 24 stories on six pages of sport, plus a page of race cards.

Another section worth mentioning was ‘Family Announcements’, always a sure sign of a paper’s community strength: more than 110 individual messages for BMDs over two-and-a-half pages.

According to the latest ABCs, The Sentinel, owned by Northcliffe, was -6pc down on 2009, selling 53,228 papers a day (can you imagine being the person who has to stick the Post It-style ad onto the front of each one?!)

Festive feedback: HTFP’s comment facility was closed on some days over Christmas, so a few readers emailed me direct about Dyson at Large in this period.

Two were Bob Bounds and Ian Carter, editor and editorial director respectively of the Kent Messenger, reviewed on 22 December.

The blog asked whether their major coverage of a murder trial had picked up sales.

“Sales go off a cliff during December so the verdict didn’t fall that kindly,” said Bob. “That said, the figures show we still did well, up on the year and the week.

“On the week, the KM series was up 276 copies, not terribly significant in normal circumstances but we would expect a big drop from week 2 to week 3 of December so it’s encouraging.

“Overall, the series went up 3.9pc on the year which is way above the trend for the second half of 2010.”

Ian added: “The edition for Weald, which is where most of the Treeby family lived, was up 18pc on the year. The core Maidstone edition was up 1.3pc, which only equates to a couple of hundred copies but wasn’t bad given the weather.”

Another emailer was Carl Eve, crime reporter at the Plymouth Herald, responding to the ‘Newspaper of the Year’ awards blog of 29 December.

“Not a word about our comprehensive coverage of the Little Teds Serious Case Review, done from a local angle while the nats and the telly took the (shorter) big picture,” said Carl.

“Are we just so far away from the rest of Britain? Should I dig out my passport to head eastwards to the land of my forefathers (Essex)?”

No worries, Carl: Plymouth’s one of many titles my 2011 target list!