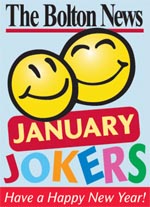 A regional daily newspaper is bidding to beat the post-Christmas blues with the help of one of Britain’s most popular comedians.

The Bolton News has launched a January Jokers contest with support from Peter Kay, who is from the town.

The newspaper is inviting readers to film themselves on their mobile phones telling their favourite gag – as long as it is clean – and text it in.

The best ones will appear on the paper’s website throughout January before being put to a public vote.

Peter Kay, an avid reader of The Bolton News, helped the launch the competition with a selection of his best silly jokes, as well as contributing signed books and tickets for his forthcoming tour as prizes.

Editor-in-chief Ian Savage said: “It is a simple idea that uses the mobile capabilities we all have at our fingertips.

“It means everyone in our community, of any age, can get involved. More importantly, it gives us all a chance to have a bit of a laugh.”