David Higgerson, head of multimedia at Trinity Mirror Regionals, has hit back in a blog post about the Lancashire Telegraph, which unveiled its redesign to readers on Friday.

The Telegraph’s new look was criticised by Roy, who said the ‘predictable’ front page splash and its presentation suggested a major reason why regional newspapers were declining.

But David said the Newsquest paper, where he did most of his training, should not be judged by its front page alone and said he disagreed with Roy’s assessment of the redesign. 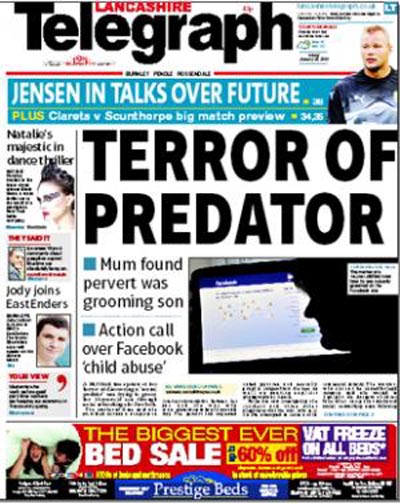 In Roy’s blog, he wrote: “I hate to rain on the Telegraph’s parade, but the sight of this ‘new’ front page is hardly encouraging. The predictable choice of splash and its presentation suggests to me a major reason for the decline in popularity of regional (and local) newspapers.

“I realise that concerns about the grooming of young girls is a topical story, especially in certain towns in Lancashire.

“But the tabloid-style treatment is surely inappropriate in a paper that is supposed to appeal to a wide cross-section of the residents of Blackburn, Burnley and their hinterlands.”

But David, in his blog, said he thought the new-look Telegraph had stood out much more than usual on the newsstand and the tabloid design would help to grab the attention of readers.

He wrote: “The splash on the Burnley edition which Greenslade refers to was headlined ‘Terror of Predator’ and was an interview with a mum who discovered a man was grooming her teenaged son online via Facebook.

“It’s a good read and isn’t what I’d call predictable. To that end, Greenslade’s suggestion ‘I realise that concerns about the grooming of young girls is a topical story, especially in certain towns in Lancashire’ doesn’t really make sense, as it was teenage boy being groomed via Facebook.

“The topicality of grooming of young girls is something the Lancashire Telegraph has led on for several years – Jack Straw’s recent comments about Pakistani gangs may have caused a surprise nationally, but the Telegraph played a big part in raising the issue and drawing attention to it four years ago – and work with the police to tackle it too.

“So the main argument from Greenslade appears to be that tabloid design is in part to blame for the decline of regional newspapers, along with the tabloid treatment they give to stories.

“If anything, I think the industry is guilty of putting too much emphasis on design. We can all name newspapers which are very poor on design but which enjoy considerable success.”