Tributes have been paid to a 78-year-old newspaper columnist who has lost his battle with cancer just weeks after being presented with an award recognising his 60 years in journalism.

John Abberley first started working for Stoke’s The Sentinel as a cub reporter at the age of 17 and worked for BBC radio before returning to the title.

He wrote his last nostalgia article for the regional daily just weeks before he died from oesophageal cancer on Saturday, which he was diagnosed with 14 months ago.

John was presented with the Editor’s Special Award by editor Mike Sassi at the newspaper’s annual Our Heroes event at the end of September. 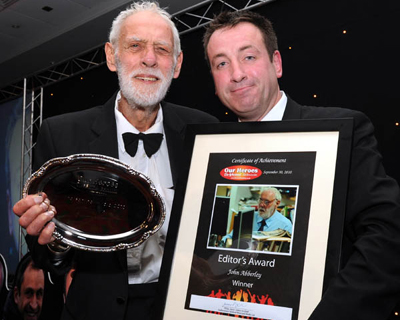 Mike said: “It was a privilege to know John and an honour to work with him.

“He was held in the highest regard by his readers and his colleagues, as a very intelligent man whose depth of local knowledge was unparalleled. He will be sorely missed.”

John became one of the founding members of BBC Radio Stoke in 1967 and spent many years as a journalist there.

After retiring from radio in 1989, he returned to The Sentinel and also wrote for the title’s Way We Were publication.

Sean Dooley, the paper’s editor at the time, said: “As a columnist, he was both an editor’s dream and a nightmare. His articles would shine with astute appraisal one day and rampant partiality the next.

“He was celebrated and condemned in equal measure by Sentinel readers, but never ignored.

“And, throughout the furore created by his opinions, he retained his courteous, gently-spoken manner and mischievous twinkle. North Staffordshire has certainly lost a legend with his passing.”

John was known by his colleagues as a stickler for grammar and accuracy and as a mine of information about the history of the area.

He was married three times and leaves wife Tessa and his four children.