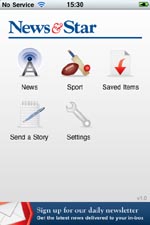 A regional daily newspaper has launched a paid-for iPhone app, which readers can purchase for a one-off fee of £1.79.

Carlisle’s News and Star has started the app to provide news and sport content to local people in a new way.

The app has been developed by PageSuite for the paper and includes social networking features and the ability to save items or send a story.

And the CN Group is planning to create news apps for its other titles in the coming months, along with apps for its announcement sections and commercial platforms, such as its property site.

Stuart Cooke, group digital development director at CN Group, said: “At CN Group we recognise that the way in which our audience want to interact with us is changing so we need to be flexible in how we deliver our content, be that in print, on the web, or on the ever increasing range of mobile devices such as the iPhone and iPad.

“Mobile users can already browse our newspapers’ lead stories on a mobile version of all our newspaper sites, but a dedicated app provides enhanced functionality such as the ability to submit stories, sign up for newsletters, and share stories on Facebook or Twitter.

“At launch our iPhone app delivers stories from the News and Star news and sport sections, with sport being broken down further, with dedicated sections for local teams such as Carlisle United and Workington Reds. The latest 20 stories are delivered to each section.

“At the same time as acknowledging that we have to be flexible in how we deliver our content to users, we also realise that we have to find new ways to monetise this content.

“Charging a small one off fee for this app is a first step in developing new charging models going forward. In the next few days we will be launching a similar app in the Android Marketplace and again a small charge will be made.”

He added the group planned to develop the apps further to include digital editions of the full newspaper, which would be available for purchase either on a one-off basis or via discounted subscription.