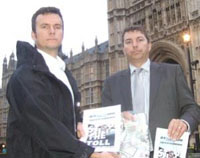 The Kentish Times Stop the Toll campaign began in 2008 in answer to many letters received by readers angry about the £1.50 fee to cross the bridge or use the tunnel across or under the River Thames into and out of Essex.

Now a giant petition supporting the campaign has been presented to Dartford Conservative MP Gareth Johnson who is in talks with transport minister Phillip Hammond about the future the toll.

Times reporter Martin Sawden is pictured above left with Mr Johnson at the Houses of Parliament.

The crossing currently makes £50m profit a year – money which gets distributed across all parts of the country.

But readers of the Archant-owned title have told the paper they are sick of spiralling travel costs and having to queue for hours at the toll during peak times as motorists stop and start to hand over fees at the barriers.

Times group editor, Melody Foreman, said: “The MP told us the coalition government was reviewing how to get rid of the toll system in its entirety and is committed to lifting the barriers and suspending the charges wherever congestion becomes intolerable.

“There is a push to see them removed in the lifetime of this Parliament and it is a distinct possibility.”