Dyson at Large: This blog’s ‘Newspaper of the Year’

As my first year reviewing regional newspapers comes to a close, I feel almost guilty at the thrill, the frowns, the freedom and the full appreciation of our beloved industry that this blog has given me.

Yes, it’s been hard work. Despite my travelling salesmen-type pal who’s sent me the odd stray papers from near and far, I’ve personally endured gridlocked motorways, grimy train stations, grinding bus journeys and gruelling yomps to bring you a truly nationwide and contemporaneous view of the local press.

I’ve gone round in circles from Birmingham through numerous nearby Midland counties, down to Cornwall, into Devon, across to Kent, in and out of London (several times), up to Yorkshire, over to Lancashire, and have even reached the Celtic kingdoms of Scotland and Wales, (Northern Ireland will come soon, I promise).

The diesel-laden miles, the train fares, the bus tickets, the cover prices have singularly only been small-change pains, but these have sometimes added up – as has the task of structuring and arguing a review of at least 700-words a week for a rightfully stern audience.

Yet all this torment has been forgotten, nay, almost basked in, because of the sheer indulgent physical and intellectual joys it has provided.

Physical? Beers near Blackpool, fresh sea bass and chips in Brixham, crispy bacon breakfasts at a B&B near Bury and one memorable (and bizarre) stand-up balti in Blackburn spring to mind.

Intellectual? Okay, there were some missed splashes, inane story counts and stretched headlines that made me groan; but everything from shining front page leads to cracking court shorts, and from community picture specials to corking sport coverage have made me smile and read on.

So which paper from the 24 dailies, 26 weeklies and the single monthly reviewed in 2010 has won this blog’s coveted ‘Newspaper of the Year’ award?

I think it deserves a countdown…

Coming in at number TEN is a family-owned daily with a live publishing philosophy close to my heart, the Wolverhampton Express & Star, which even on Saturdays has a mid-morning deadline allowing it to publish the latest news.

As I said after Ralph Moat’s early morning suicide: “If ever there was a better argument for the title’s owners, the Graham family, to keep the Express and Star ‘live’, produced and printed on the day it’s sold, this was it.”

At number NINE is the Bradford Telegraph & Argus, highlighted for its bold, gritty splash headline, its detailed report in 56-pars on pages two and three, its impressive story count and design.

Coming in at number EIGHT is the cat-killing, 176-page Cornish Guardian, selected for its 223 news stories, 100-plus sports reports, 58 reviews and features and 18 readers’ letters.

Another weekly, the print-only Cleethorpes Chronicle, holds the number SEVEN spot for its sheer cheek at not only surviving but becoming a healthy business despite launching just before the recession in 2008.

At number SIX is the Liverpool Echo, a paper that could easily become a penny dreadful in the hard news area it covers, but cleverly manages to “massage the severity of the stories with selective placement and contrasting headline styles.”

Coming in at number FIVE is the Hamilton Advertiser which, as I said at the time, “when you flick open a weekly to find this sort of headline on page 16, you know you are in for a treat: ‘Murder pair stabbed victim 23 times’.

For different reasons, another Scottish weekly makes number FOUR, The Sunday Post leading the way in how to directly involve your audience.

My favourite question sent in to a regular section for readers was: “My nose has been cold for six months. I take tablets for high blood pressure. Could it be due to long-term medication?”

One more weekly makes the top ten, with the Chester Chronicle easily deserving the number THREE spot for its 236-pages that cost just 77p, providing more than 450 reads in 74 pages of news, features and sport.

Coming in at number TWO is the Lancashire Telegraph, which began by scaring me with a thin 32-page edition but then amazed me with more than 100 stories on just 13 news pages.

There were no ‘coffee morning’ fillers either, the paper using a good range of calls, courts and council, combined with determined news leads and passionate sport.

This story count, tight design and quality was even more impressive when I realised that it still happens twice every day in print – the Telegraph making full use of both its Blackburn and Burnley editions, with as many as ten news and four sports page changes.

Which brings us to this blog’s ‘Newspaper of the Year’ (drum roll please), which goes to the similarly newsy… DERBY TELEGRAPH! 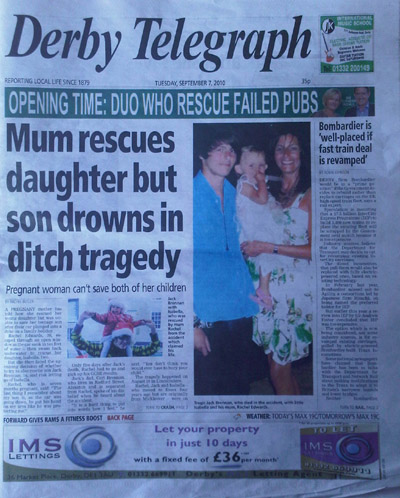 The winning element was how the paper found such a fine story that would never seen the light of day had it not been for painstaking grassroots research and perseverance that began with reading the BMDs.

The story went on to be the splash in the following day’s Daily Mail and was reported by 89 other news outlets, a great, textbook example of how local papers create national news every day.

Well done to all in the Derby newsroom.

I hope all HoldtheFrontPage readers have enjoyed this blog in 2010. I certainly have, and am already looking forward to visiting a newsroom near you in 2011…