From festive jewellery to the latest fashion, from cuddly pets to tasty cupcakes: women’s supplements can make a great package.

But I bet not many regional or local newspapers have considered offering THREE pages of half-naked female boxers!

And to think that the Evening Courier’s efforts nearly went to waste after heavy snow kept the Halifax title’s entire print run stranded 28-miles away at presses near Sheffield last Wednesday.

Fortunately, new editor Tim Robinson had the great foresight to offer the missing paper free of charge to all customers buying the next day’s paper.

And I bet there were a few stares from male readers at the centre-spread inserted in the ‘All Woman’ supplement from the delayed 1 December edition. 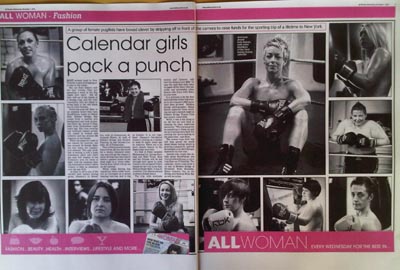 The local ladies, some glistening with perspiration, had gotten their tops off for a calendar created to help raise funds for a USA tour, selling at £6.99 a copy.

The ‘one for the lads’ treat tempted Courier designers to go to town with the pictures: they also filled the entire cover of ‘All Woman’ with the most daring curvaceous shot, and created a cheeky ear-piece on page one of the main book. 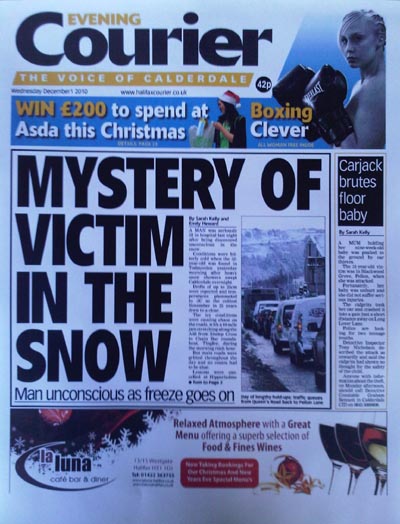 ‘Boxing clever’ was the boost line, and it certainly was – with the sub-boost reading ‘All Woman free inside’, a real draw for casual buyers.

There was news as well, of course, the ‘MYSTERY OF VICTIM IN THE SNOW’ tale about an unknown man found unconscious in the big freeze providing a decent splash.

The second lead, headlined ‘Carjack brutes floor baby’, could have led any other day, reporting car thieves pushed a mum carrying a nine-week-old baby to the ground.

There were plenty of other sound leads, a lighter ‘Headteacher is named as inspiration to pupils’ on page three and a heavier ‘How conmen ripped £6,000 from Dorothy’ on page five.

Other good issues for local readers that caught my eye included: ‘Funeral costs up 10pc’, on page three; ‘Trust’s death rates lower than average’, on page nine; ‘Do you know where Miss Baker’s family are?’ a Coroner’s appeal on page 11; and ‘Town split over supermarket’, on page 13.

In all, there were 107 reads on 19 news and features pages, not bad when heavy ads meant five pages were ‘postage stamps’, with only enough room for one or two short stories.

The 36-page main book contained another two pages of TV listings, a page of puzzles and 40-plus tales in six pages of sport.

But not much content beat those 15 eye-popping boxer pics, themselves helping to amply fill out an extra eight pages of the ‘All Woman’ supplement.

It’s not the first time in recent years that the Courier, a Johnston Press title with a 42p cover price, has faced the distribution challenge of adverse weather.

Back in 2008, HTFP reported how staff waded knee-deep through the region to make sure paper supplies were maintained.

The relatively new, additional problem in 2010 is that so many papers are now printed so far away from their marketplace, and this must be so frustrating when roads close.

It’s just as well that the Courier has always been so well-served with determined, long-standing editors who insist that the products eventually get to readers – even if it is a via a free offer a day later.

Robinson, with Johnston Press for 20 years, became Courier editor this September when John Furbisher, in the chair for seven years, went on to edit the Sheffield Star.

And before Furbisher, Edward Riley edited the Courier for 15 years, first joining the paper as a reporter in 1957.

While this ‘chair’ consistency isn’t everything, longer term sales records seem to indicate that it can provide some stability, with the Courier down a relatively desirable average of -5% in the last four ABCs, as seen here, here, here and here.

It’s just a shame that the reliable rumble of presses rolling downstairs is now only a distant memory for many newsrooms.