Readers of last week’s Kent Messenger were given a cracking news service, with no fewer than SEVEN pages devoted to a major family murder trial.

Headlined ‘TORN APART’, the grisly but fascinating story was the splash on 17 December with pictures of the murder victim, his brother, the two nephews who’d killed him and his sister-in-law also jailed for watching the violence. 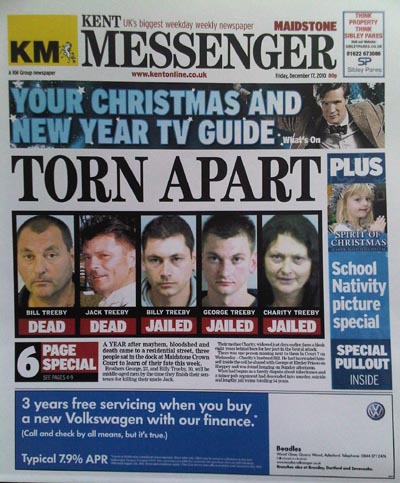 You’ll note there were two ‘DEAD’ picture labels, and yet there was only one murder – Bill Treeby having hanged himself in his prison cell three days before the sentencing.

Bill, along with his sons Billy and George, had murdered his brother Jack by repeatedly running him over with a Range Rover after a furious row over their mother’s will.

Bill’s wife Charity had callously watched as another brother, Gary, had been shot and beaten in the same attack, although he somehow managed to survive.

The mayhem and bloodshed took place nearly a year before in a Maidstone street in front of dozens of eyewitnesses, and was clearly the story of the year in the Kent town.

This was fully reflected by the Messenger’s coverage of the ‘Treeby murder verdicts’ on three spreads inside, which included:

After a nine-week trial, the timing of the conviction and sentencing couldn’t have been better, coming on the Messenger’s Wednesday deadline day for its Friday publication date.

And editor Bob Bounds made the most of this luck, leading his news team to detail the entire case and backgrounders, recording the two life sentences for the nephews and the eight-year jailing of their mother for GBH.

As a stranger to Kent, these seven pages alone kept me captivated for a good half-hour read, so you can imagine how popular this was for local readers.

What other media would or could have covered the case in anywhere near as much depth?

I’d like to bet that this led to a rise in Messenger sales last week, and would be delighted if someone from the family-owned KM Group publishers would let me know when they get the figures through.

In the main book of 72-pages, there were another 145 news, comment and features reports on 28 pages.

But that was without counting more than 200-plus reports from 41 community correspondents crammed in between pages 41 and 45.

Nor did this count include a cheery ‘Spirit of Christmas’ school nativities section from pages 33 to 40, itself containing hundreds of smiling kids in a total of 40 pictures from 18 local schools.

The main news pages were packed with plenty of hard stories and political reports, numerous courts and council stories and detailed planning applications and chemists’ lists.

Yes, this is all basic stuff, but it’s great to see a news desk ensuring all these are painstakingly gathered and printed for the local value they provide.

There were another 40-plus stories on seven pages of sport, plus the usual results and tables in four-point.

And just to make sure readers had something to do over Christmas, there was a 48-page What’s On pull-out with all the regular films, theatre and music events, plus a three-week festive TV guide lasting until 6 January.

Although this is a below average decline, I do hope it flattens out once the recession is over for a publisher that clearly cares about the product, determinedly investing in useful content for readers.