A regional daily’s campaign calling for tougher sentences for dangerous drivers has taken a step forward after a senior minister agreed to consider its demands.

The Bolton News launched its Drive For Justice campaign in September after schoolgirl Devon Foster was left fighting for her life when a car ploughed into her.

The driver could only be jailed for a maximum 26 months and the law was criticised by Judge Steven Everett who sentenced him.

Now Justice Secretary Ken Clarke has promised to discuss the paper’s call for tougher jail terms with Attorney General Dominic Grieve after the campaign gained more than 3,000 signatures of support. 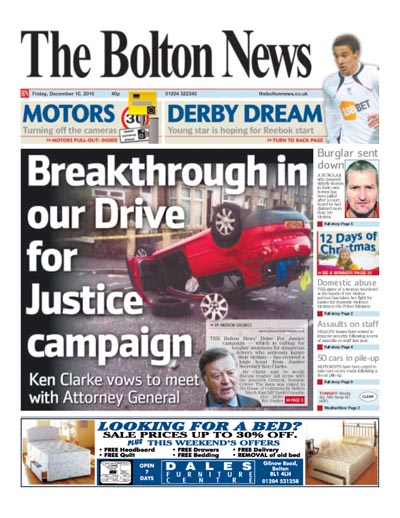 The paper called for the government to review sentencing powers for dealing with dangerous drivers who cause serious injury and received backing from Bolton North East MP David Crausby, who raised the issue in the House of Commons.

Editor-in-chief Ian Savage said: “I am pleased that our campaign has now received this profile at such a high level and must thank David Crausby for all his hard work.

“Now we just have to hope that serious consideration is given to changing the law. This is what local newspapers are all about – campaigning for justice. Fingers crossed that the law does change and quickly.”

Following the question from Mr Crausby, Mr Clarke said he would speak to the Attorney General and look at raising the two-year maximum sentence in certain cases.

He said: “In the case of ordinary dangerous driving without any serious consequences, although I deplore all dangerous driving, we cannot start imposing heavy prison sentences on everybody who might otherwise be a blameless citizen and then behaves in an absolutely reprehensible way.

“Some cases, such as the one described, make the case for having a look at the two-year maximum.”

The campaign has been backed by 15-year-old Devon’s family after she received severe injuries in the incident, including multiple skull fractures, a cracked bone in her back, a fractured arm and was left with damage to her sight and hearing.