Trams will be named after two “community champions” after a contest that prompted thousands of suggestions to a regional daily.

The Nottingham Post welcomed entries to a competition run to mark the 18th birthday celebrations of Tramlink, which runs Nottingham Express Transit.

Benjamin Rosser and Bill Chambers will now have trams bear their names after being chosen by a judging panel, of which Post editor Natalie Fahy was a member.

Mr Rosser is the founder of The Pythian Club, an organisation set up to support and empower young people across Nottingham, while Mr Chambers has spent more than 50 years as a football coach in the inner city area of St Ann’s. 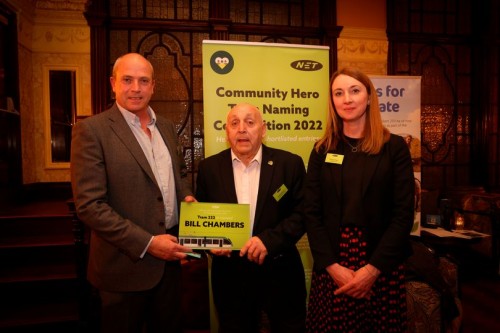 Natalie announced the winners at a ceremony held in Nottingham earlier this month.

She said: “What would Nottingham be without the trams? It sets us apart from other UK cities, gives people a quick, cheap and easy way to get around and is a major tourist draw too.

“So when I was approached and asked if I’d like to help find the next community hero to name a tram after, it was an absolute no brainer for me.

“Nottingham Post readers love stories about trams, but even I wasn’t quite expecting the response we got when we asked our readers to nominate folk who really deserve this honour.

“We had thousands of entries. Among them were hundreds of stories about people who go above and beyond in their communities every single day of the week.

“It was really humbling to read, and it’s clear that getting your name on a Nottingham tram is now a mark of having ‘made it’ in the city.”