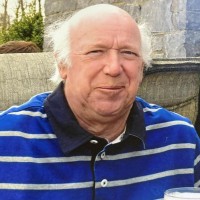 A sports journalist who was “part of the very fabric” of a regional daily has died aged 77.

Tributes have been paid to Dave Eaton, who covered football, speedway and ice hockey for the Swindon Advertiser for more than a quarter of a century.

Dave, pictured, was known among colleagues as the ‘Bald Eagle’ and hailed as a “forensic proof-reader”, in addition to his sports writing abilities.

In an obituary for the newspaper, Owen wrote: “For those who worked alongside him on the sports desk over the years, the ‘Bald Eagle’ wasn’t just seemingly omnipresent, but part of the very fabric of the Adver.

“It’s a mark of his standing at the paper that – as was often remarked – you most certainly knew when Dave was in the office, but were equally aware that it wasn’t quite the same place when he wasn’t.

“In so many ways, he was a public face of the local paper and especially its sports coverage. Writers came and went, editors changed, so did managing directors.

“But there throughout it all was Dave, as much a fixture within Swindon sport as the Magic Roundabout is within the town itself.”

Owen added: “For a fresh-faced sports writer, struggling to get one’s head around some of the intricacies and idiosyncratic traits of an occasionally-baffling sport, entry into such a world could seem intimidating.

“An evening or two in the company of Dave, with his attention to detail, generosity of time and plethora of knowledge put you more at ease.

“What he didn’t know about the sport was, in all likelihood, not worth knowing. He knew the characters – and they knew him.

“His contacts book took on the almost mythical status of a historical document. If you needed a number, Dave would have it – or he would know someone who would.”

Dave is survived by Christine, to whom he was married for 51 years, children Sarah, Michael and Janice, sons-in-law Lee and Andy, daughter-in-law Clare and grandchildren Rebecca, Oliver, James, Finlay, Max, Jessica, Amelie and Isabel.