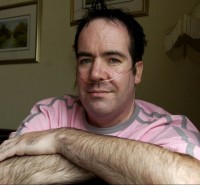 Tributes have been paid to a former regional journalist who underwent a double lung transplant and became a paralympian.

Mark Allen, left, was a reporter with the Express & Star and the Stafford Chronicle from 1995 until 1999.

The 50-year-old, who was born with cystic fibrosis and was not expected to live beyond his teens, died in hospital last week with his girlfriend and mother by his side.

Mark, who left the Express & Star to go travelling in 1999, became a keen campaigner for organ donations after undergoing a double lung transplant in 2005 when he became ill with pneumonia while working as a teacher in South Korea.

He also appeared in a BBC television documentary where he recorded a video diary to show what his life was like while he waited for 20 months on the transplant list.

Mark competed in the 2010 European Transplant Games in Sweden, winning a gold medal in the men’s doubles tournament, and bronze in the singles and Swedish ball throw competitions, despite having just 26pc lung capacity, compared to the average man of his age and height.

A keen table tennis player, he went on to win a haul of medals at the British, European and World Transplant Games.

He also proudly represented his country when he was a torch-bearer at the 2012 Paralympics.

He said: “Our dear friend Mark Allen passed away peacefully in hospital on Wednesday with his mum Maureen Allen and girlfriend Ela at his side.

“Despite being born with cystic fibrosis, Mark was determined to squeeze the most out of life and defied the odds in making it to 50 last October.

“A life lived to the full by someone able to remain positive and strong despite innumerable setbacks to his health.

“He was a kind gentleman, an inspiration and someone who brought his unique and quirky sense of fun to every occasion.”

“He had friends around the world. To many of us, Mark was our hero but he was always so understated about his extraordinary courage and achievements. His passing leaves a big hole.”