A pro-Scottish independence daily urged readers to “save the date” and subscribe to it after a fresh referendum date was revealed.

Newsquest-owned daily The National has warned readers they have “just 16 months to save Scotland from Westminster” after Scottish First Minister Nicola Sturgeon revealed plans to hold a vote on the issue on 19 October next year.

The National, the only explicitly pro-independence newspaper in Scotland, urged voters to “join our movement” on the front page this morning with a link to its subscription options.

A 10-page special report on Ms Sturgeon’s decision also featured inside the paper. 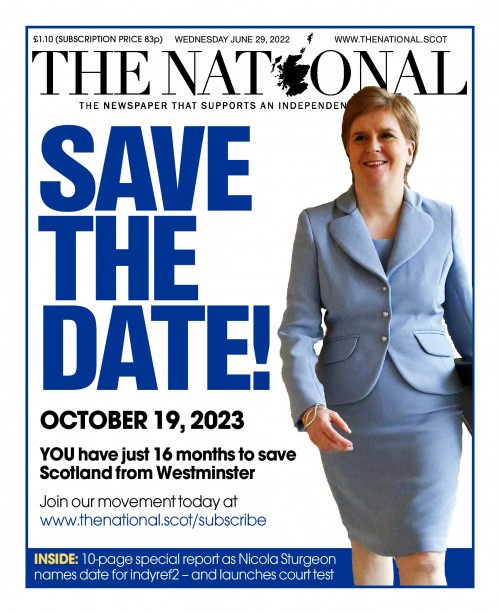 Ahead of the first referendum in September 2014, only the Glasgow-based daily’s now-defunct sister title the Sunday Herald took a pro-independence editorial stance.

The National was launched by Newsquest two months later, while the launch of the Sunday National followed in 2018.

In the 2014 referendum on Scottish independence, the “no” side won with 55pc of the vote.

Ms Sturgeon is consulting the UK Supreme Court on whether the Scottish Government can go ahead with a referendum without the approval of the UK government in Westminister.

The National’s deputy editor Stewart Ward told HTFP: “The National is Scotland’s only pro-independence newspaper – and our coverage of First Minister Nicola Sturgeon’s major announcement was part of our offering that provides a voice for around half of the population of Scotland which is not represented anywhere else on newsstands.

“When we launched, we were told our paper would barely get its foot out of the door before it collapsed.

“In fact, thanks to the support of our fantastic readers, we’re here for this crucial second independence referendum – with more than a few viral front pages along the way and digital views and engagement figures that show we punch far, far above our weight.

“We’re proud of the role we play in the Scottish media landscape, and, as our front page stressed, we’re encouraging anyone who wants to see Scotland free from Westminster rule to join our movement by subscribing to support our efforts as that lone pro-independence voice in shops all across the nation.”