Regional newspaper readers have demanded Prince Andrew be stripped of titles named after the places where they live.

Both York daily The Press and the Inverness Courier have found readers want to see the prince’s Duke of York and Earl of Inverness honours taken away from him.

The newspapers surveyed their readers online after a US judge ruled that Virginia Giuffre’s lawsuit against the Prince for allegedly sexually assaulting her when she was a teenager could go ahead.

He has denied the allegations but now faces having to appear in court. 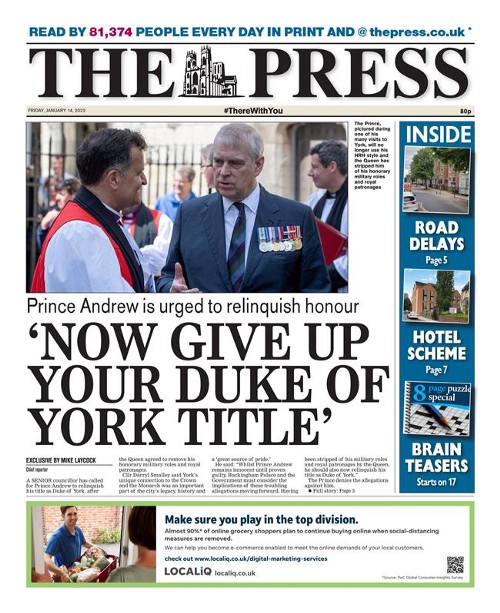 A total of 88pc of Press readers backed the prince being stripped of the Duke of York title, while a similar survey has also opened on the Courier’s website.

As of yesterday afternoon, 94pc were in favour of the Earl of Inverness title being taken from him.

The readers’ responses have been echoed by politicians in both Inverness and York, with both papers carrying calls for their cities to be distanced from association with the prince.

However, both the Courier and The Press have stopped short of adding their own voices to the demands themselves at present.

The Press has not yet responded to HTFP’s request for a comment on the issue, while the Courier declined to comment further.