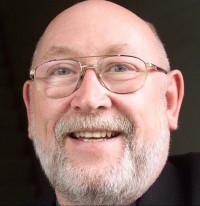 A former regional daily photographer who helped pioneer the introduction of colour pictures in UK newspapers has died aged 80.

Ken Wood, left, was picture editor of the Express & Star when it implemented one of Britain’s first electronic colour picture desks in the 1980s.

Such was his expertise that it led to him being sought after to train others in the industry on how to use the revoutionary new technology.

Earlier in his career, Ken had photographically charted the rise to stardom of a group of local lads who went on to become one of the biggest bands of the 1970s – Slade.

A miner’s son from the North East, Ken began his career as an apprentice photographer on the Hartlepool Mail before a spell on The Journal, Newcastle.

In October 1964 he headed south to join the Express & Star and ended up remaining with the Wolverhampton-based title for 37 years.

His assignments at the time included covering the local music scene and he spent many an evening sharing a pint with a local group then known as the ‘N Betweens.

In a memoir written for his grandchildren, Ken recalled: “I never thought they would make it to the top but how wrong can you be.

“In 1970 they changed their name and launched themselves as Slade. They became far and away the most successful chart band of the 70s chalking up no fewer than six number one hits between 1971 and 1976.

“I’ll never forget the day their first record reached the top. They all piled into the front office of the Express & Star asking for me and off we went to take celebration pictures.”

His son Glenn told the Shropshire Star: “Later he became picture editor. The Express and Star got one of the first colour picture desks some time in the mid 1980s and he was at the forefront of the colour picture desk and was training people and giving lectures to people from around the country.”

He retired aged 60 in 2001.  Recalls Glenn: “He basically put his camera down and didn’t pick it up again, other than taking family pictures.”

In retirement Ken continued to enjoy his golf, along with travelling and going on cruises.

He is survived by widow Margaret, children Glenn and Joanne, and two granddaughters.