Newspaper offices have been transformed into aid depots after journalists rallied to help Ukrainian refugees.

Regional titles including the Driffield and Wolds Weekly and the Bishop’s Stortford Independent launched drives to help those fleeing the Russian invasion of Ukraine.

More than 500 readers turned up to donate goods at the Wolds Weekly’s office within five days of the appeal’s launch, while the front reception area and empty rooms upstairs at the Independent’s headquarters have been transformed to hold donations awaiting transport across Europe.

So far, two consignments of donated goods have been collected from the Independent’s office while the paper has also received more than £800 in cash donations to support refugees. 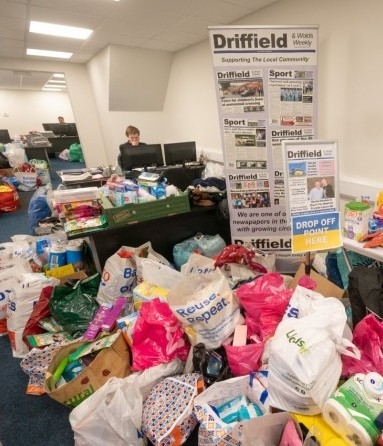 Two large vans filled with donations were taken from the Wolds Weekly’s office to Scunthorpe and photographer Mike Hopps was part of the team who delivered the goods.

Editor and owner Andy Stabler said: “I just felt we had to do something after seeing the harrowing footage on TV news bulletins. Within a couple of hours, we had drawn up a list of items we were asking for, got together a display for our office window and put out posts on social media asking for donations.

“We emailed all the primary and secondary schools in our circulation area and asked if they would collect donations from families in their villages, and we are going to pick these up next week.”

“As soon as we opened our office on Wednesday morning, our readers were calling in asking how they could help and bringing bags full of tinned food, soap, shampoo, toothpaste, sanitary items and much more.”

The Wolds Weekly office usually opens on a Saturday morning but stayed open for the afternoon because of the volume of people calling in to offer help.

Staff working on this week’s edition when the office was closed on Sunday also found a regular flow of people knocking on the door with bags of donations.

Andy said: “It shows the value of having an office in the town centre. It has allowed us to become to focal point of the community.

“We knew the people of Driffield and the Wolds would be incredibly generous with their response, but none of us expected this level of support.”

Independent editor Paul Winspear told HTFP: “The response has been phenomenal – in my 39 years in journalism I’ve never known an appeal’s cause connect with people to such an extent.”

Posting on Facebook, he added: “Every day I get to see the best of humanity: those who bring their donations and those lovely members of the public who turn up to volunteer to sort, stack and store the donations.

“Our depot has become something of a refuge and small comfort for one particular fearful and anxious Ukrainian woman living in Stortford with family in her homeland. She has made connections and even new friends through it.

“I can’t think of a better illustration of the vast gulf between the governed in my country and those who govern us.”