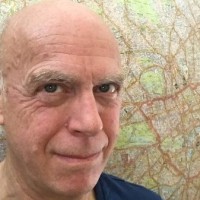 An independent city news website has launched a plea for financial support as it prepares to mark five years in business.

On London founder Dave Hill has called for readers to join the group of more than 300 supporters who collectively provide most of the website’s income.

On London was launched on 1 February 2017 after Dave’s freelance columns covering the capital city’s politics, development and culture ceased being published by The Guardian.

Dave, pictured, is now calling on more readers to pledge £5 a month or £50 a year to the site, for which they will receive the title’s Thursday evening newsletter On London Extra and free entry to On London online events.

In an editorial on the subject, Dave cited On London being “truly independent” as among the reasons for readers to contribute their money.

He wrote: “The site is owned and edited by me, its shoestring finances are not underwritten by any larger, controlling organisation and it carries no intrusive advertising or sponsored links that incentivise clickbait or ‘outrage’ journalism.

“On London knows its own mind. In a time of rampant populism and reductive politics, the website and its writers recognise that building The Good City is difficult and complex, and seeks to explain what is really going on and what it really takes to get things done.

“On London sticks up for London in a time when the city is wrongly seen by many as the nation’s enemy and national government seems intent on weakening its economy (despite knowing its vital importance to the UK’s) and eroding its political autonomy (despite claiming to favour devolution).

“On London recognises that London has huge problems – with poverty, congestion, housing costs and more – as well as great strengths, matchless opportunities and enduring attractions for people from all over the UK and the world.

“Those problems need to be addressed with renewed urgency as Covid-19 continues to take its toll.”