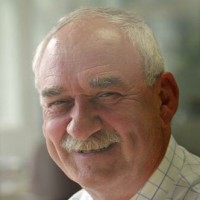 A news editor who returned to his regional press roots after interviewing John Lennon and Yoko Ono in bed has died aged 81.

Tributes have been paid to Arliss Rhind, who served Dundee sister dailies the Courier and the Evening Telegraph in two spells.

His time at the DC Thomson titles sandwiched by stints on the Daily Express and the Daily Mail, where he held senior editorial roles, as well as time away from journalism running sports shops.

While with The Express in 1969, he travelled to Amsterdam to cover John Lennon and Yoko Ono’s sleep-in protest and interviewed the couple.

Journalist Chris Ferguson, who worked at The Courier with Arliss for more than 10 years, told the newspaper: “He was a huge character and a brilliant conversationalist.

“He told the most engaging stories of his early career and, importantly, they were the stories people loved to listen to.

“But he was also an encouraging mentor to many younger staff, a colleague who was not afraid of expressing a strong opinion, and a journalist of talent.”

Arliss, pictured, began his career aged 17 as a trainee reporter on The Courier and Evening Telegraph before joining the Express, initially at its Dundee office and later Glasgow, then Fleet Street.

He later became one of the paper’s foreign correspondents, reporting from North America, Africa and east Asia, before being made a junior executive in 1973.

Two years later he became news editor, a position he held until becoming assistant editor in 1980.

Arliss then joined Daily Mail as an associate and then assistant editor before returning to Scotland, where he opened sports shops in Arbroath and Carnoustie.

He moved back to journalism as a reporter with The Courier before being appointed news editor in 1997.

Arliss is survived by his children Lesley, Gillian and Damon, seven grandchildren and two great-grandchildren.