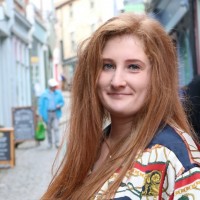 A regional journalist has launched a new network aimed at helping to tell local LGBTQ+ stories across the country.

Sophie Perry has set up the LGBTQ+ Journalism Network after being “shocked” that no such group for journalists who are members of the community existed.

Sophie, a digital reporter at the Newsquest-owned Oxford Mail, hopes the group will be a “supportive community and network” for people who identify as LGBTQ+ and work in, or are studying, journalism in the UK.

She was inspired by already existing groups such as We Are Black Journos and Women in Journalism.

Sophie, pictured, said: “In my opinion, LGBTQ+ stories are not separate from local news — they are local news — and I wanted to connect with people who thought the same.”

“I hope the group will be a positive place for people to share their success stories and big wins, job opportunities, best practice for telling LGBTQ+ stories as well as a space where people can advise and support each other.

“Going forward I am hoping to run events for the group including social meet-ups and panel discussions, to further unite LGBTQ+ journalists across the industry.

“Response to the group so far has been absolutely phenomenal and more than I could have ever expected. This is perhaps down to the fact that there was, and is, a need for such a group to exist.”