A local newspaper which attempted to raise £30,000 from a crowdfunding bid in January is to close with the loss of eight jobs after the appeal generated just £678.

The Downs Mail warned it may have to begin charging readers unless it received a £30,000 cash injection following the “severe impact” of the coronavirus pandemic.

But its appeal for funds closed on 14th January having raised just £678 in the space of 48 days, with 23 supporters having made donations.

Now the 25-year-old free title, which circulates fortnightly in the Maidstone and Malling area of North Kent, has been printed for the final time after liquidators were called in. 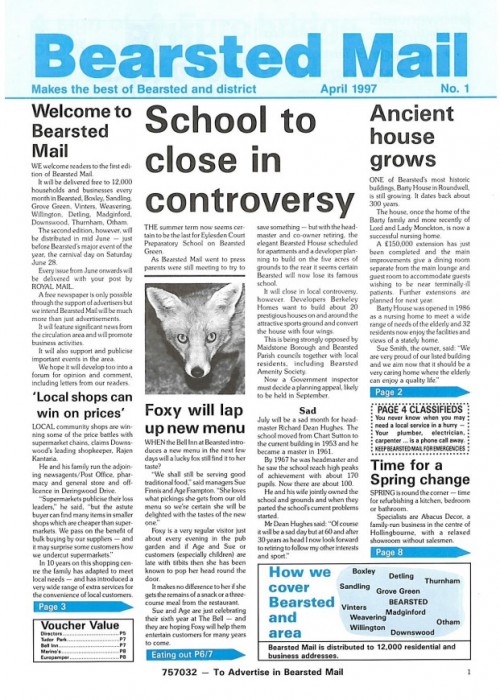 The first edition of the then Bearsted Mail in April 1997

The Mail, which has just celebrated its 25th birthday, was launched as the Bearsted Mail in 1997 by former Kent Messenger news editor Dennis Fowle and his daughter Claire Procter, who had a background in advertising sales.

Renamed the Downs Mail in 1999, it had a monthly distrbution of 88,000 copies across five local editions at its height, alongside a quarterly leisure and tourism magazine, Mid Kent Living.

Claire, who took over the business from her father when he retired in 2009, puts the closure of the title firmly down the pandemic, saying that up until March 2020 it was doing well.

However advertising revenues nose-dived by 80pc in the first few days of lockdown before hitting zero for the following three months.

A restructuring plan was implemented, with staffing and office space pared down, fewer editions published and a government Bounceback loan taken out.

But just as business began to recover in August 2021, sales once again took a plummet as advertisers pulled spend amid talk of more winter restrictions.

By February of this year, print costs had risen four times in 12 months, while energy costs had skyrocketed.

At the time of the appeal, the company put the annual costs of printing and distributing the newspaper at £55,000 and a further £14,400 a year to maintain the website.

Said Claire: “The small team at the Downs Mail that has made this all happen have all worked so hard, particularly over the last two years with so many changes and challenges. Making them redundant after all their efforts has been the saddest decision of all.

“We just haven’t been able to recover and after 25 years, it is so sad for us and for the community we have been such a large part of.

“We have seen many other publications fail and never thought we would too but the combination of the lack of advertising revenue, rising costs and competition from free advertising online platforms means we also haven’t survived.

“We tried all we could to turn things around but it just wasn’t enough.”

During the course of its 25-year existence the Mail has been involved in several local campaigns, including fighting to keep the Hazlitt Theatre open when Maidstone Borough Council wanted to close it.

The title also spearheaded a £100,000 fundraising effort to make Kent County Council build a pedestrian bridge across the A249 in Detling after the death of eight-year-old Jade Hobbs and her grandmother at Christmas 2020 as they tried to cross the road to buy sweets.

Dennis, now 87, started his career in journalism in 1952 when he was 17, as a trainee working on the Kent Messenger based at the Sittingbourne office.

At 26 he became news editor of the Messenger, based at the Maidstone office, before leaving to set up a magazine and book publishing operation and then a typesetting and newsletter business in London. 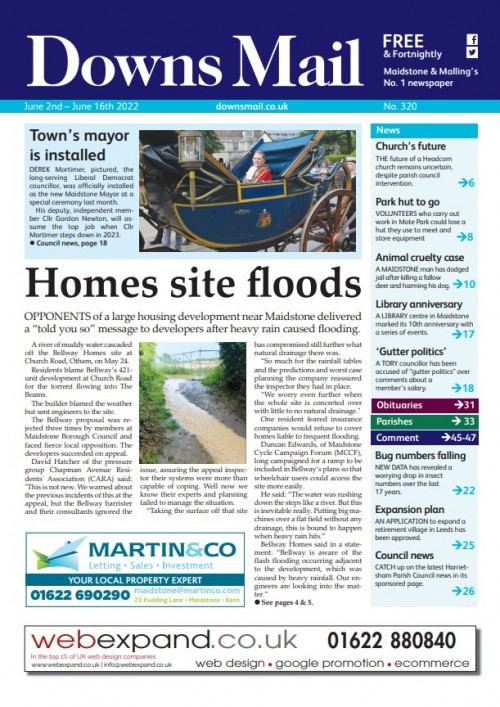 The final edition of the Downs Mail, published this month