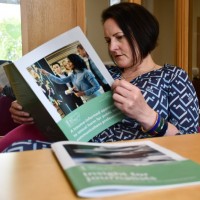 Journalists have been urged to make the use of terms including “monster”, “beast” and “paedo” a thing of the past when referring to sex offenders.

New guidance has been published in a bid to help reporters understand the trauma experienced by victims of sexual offences and encourage them to consider the language they use in their coverage of such issues.

It includes a list of words, terms and phrases considered harmful, along with alternatives and explanations as to why they should be encouraged instead.

Rather than “monster” or “beast”, journalists have been urged to consider describing sex offenders purely in factual terms, while they are asked to describe “paedos” as “perpetrators of child sexual abuse” in stories.

The guidance, from the police and crime commissioner for Devon and Cornwall, states: “When we give those who harm others salacious titles, we create a culture which separates ‘them’ from ‘us’.

“Individuals who commit sexual harm are a part of our society and they are more often known to those they harm as family members, partners, friends, colleagues, acquaintances, people in positions of power etc.

“The term paedophile, relates to an adult’s sexual preference towards children and not specifically sexual offences committed. A person can be a paedophile and never commit a sexual offence.

“Whilst the slang term ‘paedo’ is recognisable language by some, when used to describe a person convicted of child sexual offences, it does not convey the gravity of those offences towards children.

“‘Paedo’ is an informal term which is sometimes used in society to joke about or trivialise sexual offences.

“Children deserve the dignity and respect of adults when referencing crimes committed against them.”

Other discouraged phrases include “rape victim” because it “can be perceived as defining a person by the offence or harm they have experienced”, and the description of an offender as “caged” because it implies them to be “animals” who are not “able to control their actions”.

The guidance has been produced as part of the ‘Altered not Defined’ project, which seeks to engage journalists and PR experts in efforts to signpost victims to help and support.

It was commissioned by Alison Hernandez, Conservative police and crime commissioner for Devon, Cornwall and the Isles of Scilly.

Ms Hernandez, pictured, said: “The Insight for Journalists guide has within it some advice about terminology and clarity of language.

“We are asking reporters and editors to consider whether they could issue warnings before potentially upsetting content is displayed, or whether it is necessary to include it at all, so an audience can choose whether to engage with it or to consume it at a different time or location.

“Language and communications around sexual violence has never been so important, and the media and PR industries are vital in communicating these messages, so I really hope they engage with this work and help us to make a positive difference.”