A regional daily used a series of past front pages to challenge a minister’s claim there is no health “crisis” on its patch.

The South Wales Argus has criticised Baroness Morgan, Minister for Health and Social Services in the Welsh Government, over comments made to fellow members of the Welsh Assembly about waiting lists.

Baroness Morgan told the Senedd that she didn’t “think we’re in a crisis” after being taken to task on waiting lists for NHS treatment in Wales reaching 707,000 people this month.

But the Newport-based Argus has published several stories on the issue in recent months and has now used its front pages to illustrate the problem to the minister. 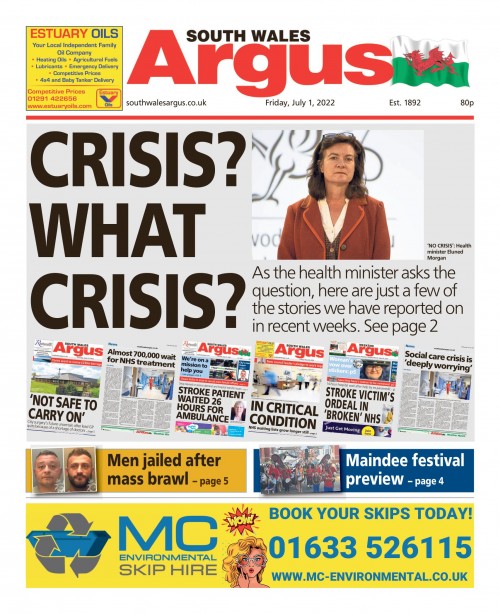 The newspaper splashed on Baroness Morgan’s comments on Friday, pictured above.

In an accompanying comment piece, editor Gavin Thompson wrote: “The NHS is not in crisis – at least not according to health minister Eluned Morgan.

“Baroness Morgan told the Senedd earlier this week that while, the situation was ‘not great’ across Wales, ‘I don’t think we are in a crisis’.

“The South Wales Argus, and many of our readers, disagree.

“Every month brings more stories of scandalous waits at A&E, stroke sufferers going untreated for hours despite the difference fast treatment makes to their chances of recovery, people waiting, waiting and waiting for an ambulance because the emergency vehicles are parked outside the hospitals unable to admit patients, and people unable to find suitable care that would enable them to be safely discharged from hospital.

“And each time we report such a story, there will be dozens of comments on our Facebook posts with people who have suffered similar experiences.”

Gavin went on to note the issue was “particularly acute” across the paper’s Gwent patch.

He added: “Acknowledging that this is a crisis and that it needs dramatic steps to address it is not, or shouldn’t be, something the minister feels she must deny.

“Nor is it a criticism of the people who have given, and continue to give, their all working for the NHS. Indeed, it would be a recognition of the challenges they face and that their concerns are being heard.

“We have come through a pandemic that saw our NHS staff under huge pressure, working in horrendous conditions, and many will be experiencing trauma and walking away from the profession.

“Covid also saw services stripped back, leading to very long waiting lists, as well as more later diagnosis of illnesses that will mean worse outcomes for patients, or put bluntly, more people will be seriously ill or die. All of that piles more pressure on the NHS.

“So it’s not a surprise that we are in crisis. But surely an important first step in tackling it, is to admit the scale of the problem.”