A regional daily has renewed its fight for a new law to help bereaved families properly participate in inquests.

The Liverpool Echo has lent its support to proposals for a so-called ‘Hillsborough Law’, which would also bring an end to “limitless legal spending” by public bodies.

The fresh call comes after the broadcast of a TV drama telling the story of Anne Williams, whose son died in the 1989 Hillsborough disaster.

The Echo has long campaigned for justice for the 97 Liverpool football fans who died as a result of the tragedy at Sheffield Wednesday’s Hillsborough stadium 32 years ago. 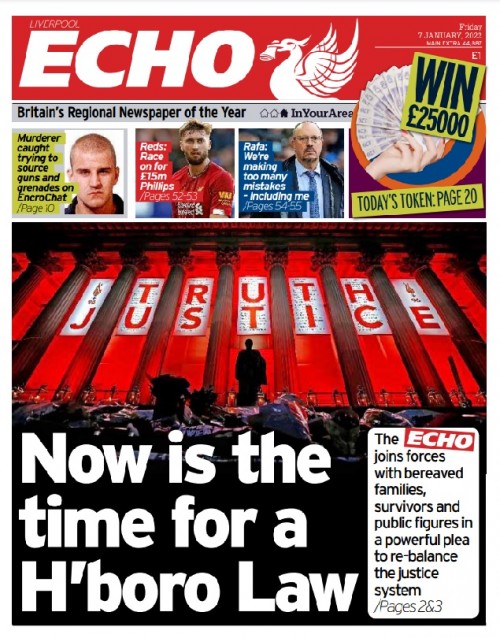 The Echo demanded a change in the law, which would include a duty of candour for police, in May after two former South Yorkshire Police officers and a solicitor who worked with the force had no case to answer over the disaster.

It means just one person has been successfully prosecuted in relation to the tragedy, for a health and safety breach, despite a jury inquest previously finding the victims were unlawfully killed.

The Echo splashed on its renewed call this morning, pictured above.

In an accompanying comment piece, editor Maria Breslin wrote: “ITV’s powerful drama Anne reduced millions of viewers to tears as it depicted the disgraceful obstacles faced by the battling mum and other Hillsborough families in their relentless pursuit of justice.

“There were tears of heartbreak – but also tears of anger and frustration – as we saw those who lost loved ones at the 1989 FA Cup semi-final thwarted at every turn by cover-ups and the power of the establishment.

“And, while nothing can ever right those terrible wrongs, the introduction of a law ensuring other families never suffer the same ordeal is something worth fighting for and a fitting legacy for the survivors and bereaved relatives who campaigned for the truth.

“The Echo today joins the call for a Hillsborough Law, which would go some way to making sure we never see such a devastating failure of British justice again – 97 men, women and children unlawfully killed and, in the eyes of the law, no-one accountable.”

The proposed law demands public officials, including police officers, have a legal duty to “be honest” and also ensures bereaved families can properly participate in inquests and inquiries through publicly-funded legal representation as well as bringing an end to limitless legal spending by public bodies.

Maria added: “The fact we need such a law underlines the horrific ordeal suffered by families and survivors in the wake of Hillsborough. It simply can never happen again.

“So please join us in campaigning for the Hillsborough Law and, in doing so, we salute the dignity, perseverance, honesty and sheer determination of ordinary people like Anne forced to do extraordinary things in the pursuit of the truth.”