An editor has vowed to uphold his newspaper’s traditions as it marks 150 years in print – but has also pledged to find more ways “appeal to a modern audience”.

The milestone prompted Argyll and Bute MP Brendan O’Hara to lay down an Early Day Motion in the House of Commons congratulating the weekly paper, its staff and its owners on their achievement.

The occasion was marked with an eight-page pullout in this week’s edition, pictured below, which has been published today. 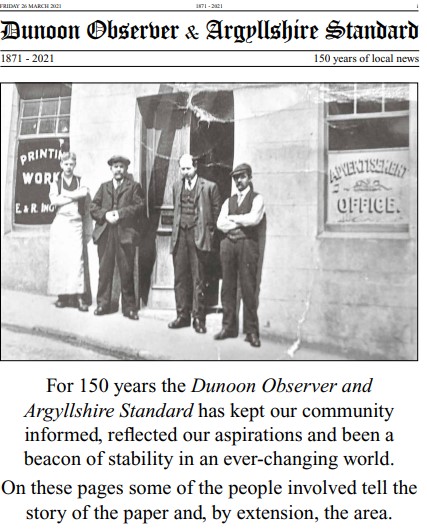 Editor Gordon Neish said: “Looking back over the history of the paper, and particularly the editors who came before me, it’s clear that I stand on the shoulders of giants.

“I aim to uphold the traditions of the paper while constantly looking to appeal to a modern audience.

“In these troubled times reaching 150 years of uninterrupted publication is quite an achievement.”

According to the Observer, some outlets still see queues on a Friday morning “when a particularly important local story is expected in the title”.

Peter Laidlaw, managing director of publishers Argyll Media Ltd, said: “For a local newspaper reaching a 150th anniversary is a remarkable achievement and one we are very proud of.

“Over the years the leadership of the owners and editors has been vital and at no time more so than when facing the pandemic of the last year.

“Editor Gordon Neish, has led an outstanding effort by all the team – reporters, advertising and production staff – to help keep the local community together in the face of unprecedented challenges.”