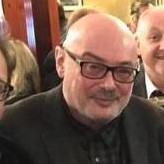 A sports editor who was “universally regarded as one of the best production journalists of his era” has died aged 64.

Tributes have been paid to Iain Scott, known for his “outstanding work” at Glasgow-based dailies The Herald and Evening Times.

Iain, pictured also held leading sports journalism roles at The Sun, the short-lived Sunday Scot and the Daily Record during his career.

In an obituary, The Herald’s Hugh MacDonald described him as “an old-style journalist but one who reacted easily to the imperatives of the changing face of newspapers”.

Hugh wrote: “Scotty worked hard at his job and expected colleagues to do the same. However, he was a generous executive.

“Reporters would wake to texts from Scotty praising their efforts in that day’s edition.

“He regarded the production of newspapers as a serious business but was a humorous man.

“This sense of fun was disguised by a dryness of tone and sometimes escaped notice as it was articulated from the side of his mouth and without unnecessary drama.”

Iain began his career in his native Ayrshire and then moved to Argyll, before joining the Stirling Observer in the late 1970s.

He later moved on to the Glasgow-based daily titles.

Hugh added: “He was a constant friend. He did not gush. One would not see him for months but he had the ability to pick up a conversation from way back.

“It was easy to rekindle affection and intimacy. Scotty would recoil at such sentiments but it was part of his essence to be a loyal, close mate.”

Iain, who died on 25 June, is survived by wife Libby, and children Iain, Alasdair, Jamie and Cara, as well as grandchildren Sarah, Miley, Cooper, Mia, Arabella and Ollie.