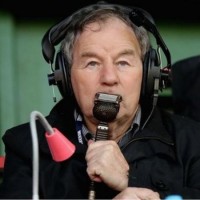 Tributes have been paid to Bleddyn Jones, who commentated on Leicester Tigers matches for BBC Radio Leicester for more than 30 years.

Bleddyn, pictured, had himself made 333 appearances as a player for the Tigers between 1969 and 1978 before moving into the commentary box.

During his career, he commentated on five European Cup Finals and every Premiership final involving the club.

“Such a lovely and kind-hearted person who was always great company and very good to me while covering the Tigers. Loved by everyone at the club.

“Will remember him fondly for so many funny stories. My favourite involved changing an exploded car tyre with him in torrential rain on a dual carriageway in Lyon trying desperately to get to Tigers’ fixture at Bourgoin in December 2007.

“He never swore or raised his voice. Not once.”

Reach plc South West rugby writer John Evely, who trained at Leicester’s De Montfort University, added: “Bleddyn Jones will forever be the voice of Leicester Tigers on the radio for me.

“On a personal note one of the nicest people to share a press box with.”

Originally from Glamorgan and a teacher by profession, Bleddyn was headmaster at Little Bowden Primary School, in Market Harborough, until his retirement in 2005.