An editor has hit out at a national tabloid after it depicted her patch as a “failure” and made numerous claims about its issues with drug abuse.

Nicola Adam, who edits Blackpool daily The Gazette, has criticised The Sun for the way it “lampooned” the seaside resort in a report last week, in which the national daily dubbed it the “drug death capital”.

The Sun made claims including that drug users in Blackpool cook heroin at school gates and that dealers are delivering drugs by e-scooter.

But Dr Arif Rajpura, Blackpool Council’s director of public health, described the story as “lazy journalism” in a rebuttal via The Gazette, adding he had “no knowledge” of any such incidents as those reported by The Sun. 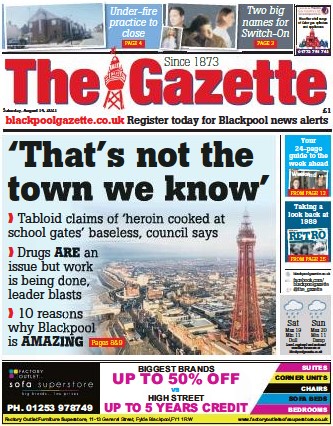 The Gazette splashed on the council and other resort figures hitting back at the tabloid’s allegations on Saturday, pictured above, while Nicola herself had her own say on the matter in an accompanying editorial.

She wrote: “Blackpool is many things to many people. For generations it has been a nostalgic holiday destination steeped in magical, childhood memories, for others a gig stop-off on a tour, to some it means rides and beaches and nights out but to most of you reading this comment it is quite simply home.

“Like all places and particularly seaside resorts, it has its dark side. Bright lights and cheap accommodation and the lure of seasonal work can attract those at low ebb seeking sanctuary – and therefore vulnerable.

“The reality is that Blackpool has huge issues with poverty, public health and living standards and in common with most towns and cities, drugs – and all of this urgently needs more action to level up opportunities with the south.

“Daily tabloid newspapers may like to lampoon us as a failure but the truth is a far different beast.

It is not the first time The Gazette has found itself in a spat with The Sun over the latter’s portrayal of Blackpool.

In 2016, then-deputy editor Andy Sykes appeared on BBC Radio 5 Live to defend the resort after The Sun claimed “local louts” had been responsible for an alleged attack on Strictly Come Dancing star Gorka Marquez.

Subsequent enquiries to Lancashire Police by The Gazette revealed no complaint had been made by the dancer, and the force later said it had found no evidence of the supposed assault.