A weekly newspaper captured the homecoming of one of its Olympic heroes as he returned to its patch with two gold medals.

The Maidenhead Advertiser celebrated swimmer Tom Dean’s double victory after his family invited the paper along to a surprise party in his honour.

The Advertiser ran a souvenir edition last week featuring pictures from the party in a front page wraparound.

It was also dedicated to two silver medallists, rower Jack Beaumont and canoeist Mallory Franklin, who are also from the Advertiser’s patch. 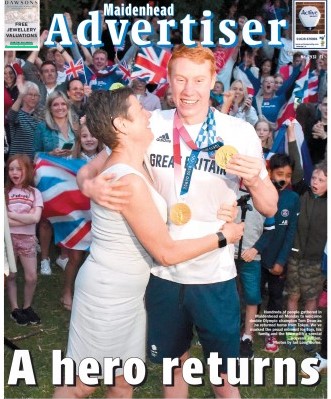 Editor James Preston told HTFP: “We are incredibly proud of our Maidenhead athletes in Tokyo and we know how much their achievements mean to our readers and the town as a whole.

“Tom Dean’s two gold medals have been particularly inspiring so we wanted to capture the public mood by producing a souvenir edition to mark his homecoming and an incredible couple of weeks for our area.

“Thank you to Tom’s family for inviting us along so we could share their moment of celebration with them.”