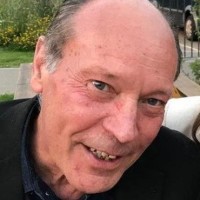 A journalist whose career spanned five decades has died aged 65 just two years after his retirement.

Tributes have been paid to Rupert Taylor, who worked for Sussex Newspapers before retiring in 2019.

Rupert, pictured, died on Sunday 2 May after being found unwell at his home near Uckfield.

Fellow journalist and lifelong friend Mick Plumb told the Eastbourne Herald he was “a lovely, lovely man who always put others first, one of the most talented local newspaper reporters of his day who went on to edit a number of Sussex titles as well as enjoying a stint on the Daily Telegraph”.

Lewes-born Rupert began his career on the Sussex Express and had stints at its Seaford, Hailsham, Uckfield and Crowborough district offices.

He also had spells on the Worthing Herald and Littlehampton Gazette, working in the sports department as well as on general news reporting, before moving to the Eastbourne Herald and later the Telegraph in London.

Rupert returned to Sussex after his second wife Charlotte, also a journalist with whom he had worked at the Mid Sussex Times, became ill and later died in 2010.

At the time of his retirement, Rupert was chief reporter of the Express.

Former Express journalist John Eccles said: “He was a great journalist and knew how to get the most out of a story and get people talking.

“He had a great sense of humour and wonderful way of looking at the world. Very offbeat and light-hearted.

“He was a little bit barmy, a wonderful colleague, a very good friend and a great personality. I shall miss him.”

Rupert had two daughters, Daisy and Chloe, with his first wife Joanne and a third daughter, Matilda, with Charlotte.