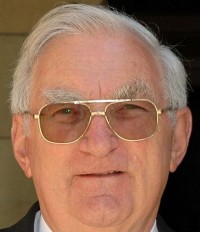 A regional journalist who continued working as a court reporter until he was almost 80 has died aged 86.

Tributes have been paid to Mike Trevail, who worked for newspapers including the West Briton and Cornish Guardian during a 62-year career.

Mike, pictured, joined the West Briton at 17 in 1951, having taught himself Pitman shorthand during the school classes he did not find interesting.

Aside from a break for National Service, he spent three decades with the West Briton, where he rose to become sports editor.

Mike later moved to the Newquay office of the Cornish Guardian in 1981, where he helped to train new journalists.

Upon retiring from the Guardian, Mike became a freelance reporter and covered Truro Crown Court for another 20 years until he was 79.

His son Phil told Cornwall Live: “Dad’s final article in the West Briton was in the summer of 2019 when he did a report on his grandchildren Alice and Jack Trevail who both won gold in a triathlon.

“Dad was a true gentleman. He was a humble man who didn’t have any enemies and was a very well respected, honest and fair journalist.”

Mike died on 24 January with Pam, his wife of 62 years, by his side along with their children Phil, Sal and Dave.

He is also survived by grandchildren Alice, Tom, Emily, Ben, Abi, Jack, Charlie and Josie, and great-grandchildren Izzie and Sophie.