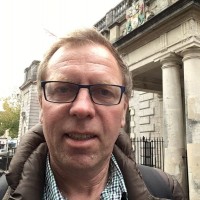 A regional journalist has been forced to clarify he is not Boris Johnson’s adviser in the wake of the Downing Street party controversy.

Ed Oldfield, who is agenda editor for Devon Live, Cornwall Live and Plymouth Live, was bombarded on Twitter after being mistaken for his namesake in Number 10.

The Downing Street Ed Oldfield was among the staff seen joking about holding a Christmas party last December in leaked footage obtained by ITV News.

But publication of the footage prompted Twitter users to tag the journalist Ed, pictured, when voicing their outrage about the controversy, forcing him to make “crystal clear” on the social media site that he was not the man in the video.

Ed, who was previously a local democracy reporter, told HTFP he had first become aware of his namesake when BBC journalists sent requests asking him to set up interviews with ministers and that, despite his repeated insistence that he is not the adviser, Twitter users continued to mistake his identity this morning.

Ed, a reporter with more than 30 years’ experience, added: “Overall, it’s been a strange and interesting experience.

“It’s slightly worrying at times but thankfully the majority of people have taken it as a light-hearted diversion from what is a very serious story.”

Mr Johnson has apologised over the footage, but told MPs he has been “repeatedly assured” no such gathering took place.

He further claimed was “furious” and revealed he had asked the Cabinet Secretary to investigate during Prime Minister’s Questions this lunchtime.

Posting on Twitter after PMQs, Ed wrote: “Well the PM has just delivered a less than convincing performance at PMQs, apparently sharing the anger and outrage and announcing an inquiry into the Christmas party.

“I wouldn’t want to be my namesake now, looks like the rug is being pulled.”

Ed has now written a first-person piece about his experience and also revealed he is not the only member of his family to have suffered due to having a famous namesake.

Posting on Twitter, added: “I have a brother called Mike. He spent the early part of adulthood explaining he did not write Tubular Bells.”