The Times of Tunbridge Wells has announced the move, which will see it go online-only until at least the end of January.

The free paper says it has made the move due to advertisers in the hospitality and events sectors having to shut down due to the new restrictions.

In November, the Times gave away more than £30,000 of advertising for free in a bid to help local businesses coming out of lockdown. 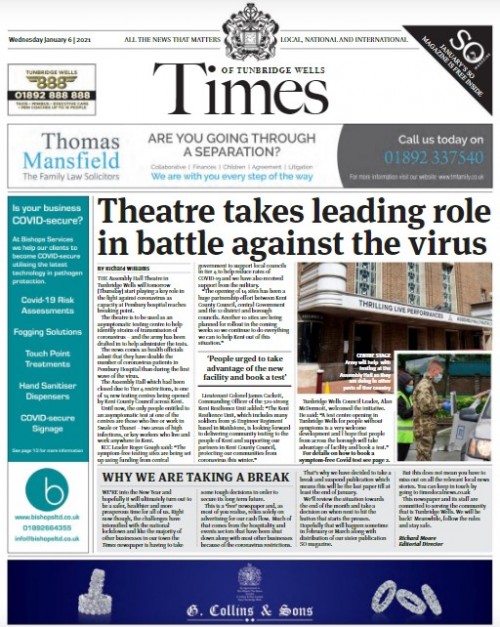 Announcing the Times was “taking a break” in yesterday’s edition, pictured above, editorial director Richard Moore said: “We’re into the New Year and hopefully it will ultimately turn out to be a safer, healthier and more prosperous time for all of us.

“Right now though, the challenges have intensified with the national lockdown and like the majority of other businesses in our town the Times newspaper is having to take some tough decisions in order to secure its long-term future.

“This is a ‘free’ newspaper and, as most of you realise, relies solely on advertising for our cash flow. Much of that comes from the hospitality and events sectors that have been shut down along with most other businesses because of the coronavirus restrictions.

“That’s why we have decided to take a break and suspend publication which means this will be the last paper till at least the end of January.”

Similar measures were taken by regional press groups during previous lockdowns, with publication of certain titles being suspended.

Richard said the situation would be reviewed “towards the end of the month” and a decision would be taken on “when next to hit the button that starts the presses”.

He added: “Hopefully that will happen sometime in February or March along with distribution of our sister publication SO magazine.

“But this does not mean you have to miss out on all the relevant local news stories. You can keep in touch by going to timeslocalnews.co.uk.

“This newspaper and its staff are committed to serving the community that is Tunbridge Wells. We will be back. Meanwhile, follow the rules and stay safe.”

The announcement prompted Ian Carter, editorial director at Iliffe Media, which owns a number of titles in Kent, to send his best wishes to the Times.

Posting on Twitter yesterday, he said: “A shame to see today’s edition of the Times of Tunbridge Wells announcing it is suspending publication.

“Despite the industry’s challenges, Kent has retained a healthy and competitive local media (not that people always seem to appreciate it.) Good luck to Times staff.”