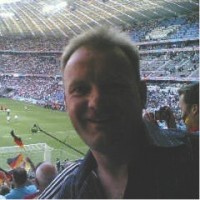 A former regional sports journalist has been appointed to a top media post in the Middle East.

Colin Davidson has been made senior media director at Al Jazeera English.

Colin, pictured, began his career with the Aberdeen Evening Express in 1982.

He later went on to work for Grampian Television, Scottish Television, Sky Sports, Setanta Sports and BT Sport in the UK.

In 2010 he was executive producer of the South African Broadcasting Corporation’s coverage of the FIFA World Cup before moving to Australia and working for Fox, ESPN, SBS, Channel 7, Channel 9 and the specialist horse racing channel TVN.

The 59-year-old moved to Qatar in 2013 – joining Al Jazeera Sport and then beIN Sports, the global network of sports channels owned and operated by the Qatari media group beIN.

There he served as senior producer/director on English Premier League and Champions League coverage as well as FIFA World Cups and UEFA European Championships.