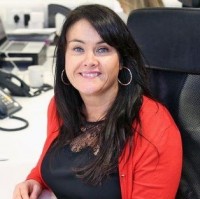 A former regional journalist who stood as an Independent candidate has come third in the Hartlepool by-election.

Samantha Lee, who was chief football writer at the Hartlepool Mail for five years, received 2,904 votes – a 9.7pc share – in the race to become the town’s MP.

The result meant Samantha, who now runs PR firm Publicity Seekers, finished above candidates from parties including Reform UK, the Green Party and the Liberal Democrats.

Heritage’s Claire Martin polled the next highest number of votes after her with 468.

The seat was won by Tory candidate Jill Mortimer, who took the seat from Labour on a 23pc swing.

Samantha had stood on a ticket of being “a voice that truly understands business and community in Hartlepool and speaks up for it”, encouraging Mail readers to “show politicians that we are sick of their party games and empty promises”.

Posting on her Facebook page prior to the result being announced this morning, Samantha said: “Sadly it’s clearly going to be a Conservative win.

“Sorry I couldn’t take it over the line for you. The system is not built to let people like me in.

“I will break it without them though. I’ve still got our back Hartlepool.”