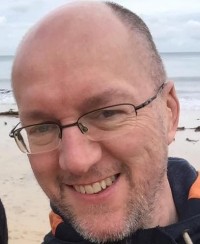 An ex-regional journalist has joined forces with a former soap star for a new football podcast.

Mark, pictured, began his career as a junior sports reporter on the Maidenhead Advertiser in 1989 and went on to serve as sports editor of the Grantham Journal, Slough Observer, Kensington Times and the Gulf Daily News in Bahrain.

He was also a sports writer at the Nottingham Evening Post and has been editor of several sports magazines and websites.

In addition, Mark will be talking to fans of English clubs from around the world.