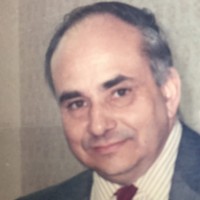 An editor who helped to launch a regional daily and later served on its publisher’s board has died aged 87.

Tributes have been paid to Peter Leaney, who edited North Wales daily The Leader for many years.

Peter, pictured, had been involved in The Leader’s launch by Oswestry-based Woodalls group in 1973, serving as its inaugural news editor.

He later went on to be group editorial director with a seat on the board of the company, which became North Wales Newspapers, until he retired in the early 1990s.

Former NWN associate editor Steve Rogers said: “Like countless other journalists, I will look back and be grateful for coming under the wing of Peter Leaney.

“He took me on as a sub-editor on the fledgling Evening Leader and I was blessed to have his encouragement and guidance.

“He was a highly intelligent, astute figure who was a genius at nurturing what he believed was young talent. He was always giving, and his ‘young lieutenants’ never wanted to let him down.

“Peter’s contribution to journalism was immense and he richly deserved to reach the top as the company’s editorial director but even then he was still connected to the grass roots doing the best he could for his staff.”

Peter was born on the Wirral, the son of a Customs and Excise officer at Liverpool Docks.

Aged seven, his family moved to the village of Caergwrle near Wrexham where he soon became friends with Gwynifred, the girl who became his wife for 63 years.

After being educated at Ellesmere College in Shropshire, he left at 18 to become a trainee journalist with Woodalls, working first in Llandrindod Wells and Newtown before joining the Wrexham Leader.

His dedication and talent in news-gathering and production led to his first editorship in 1967 when he was put in charge of its weekly sister paper, the Flintshire Leader at Mold. He ran it for six years until the launch of the Evening Leader at Wrexham.

Former BBC and HTV veteran John Shone, who joined the Flintshire Leader as a senior reporter in 1968 after working in London, said: “Peter was one of the best editors in the whole of Wales.

“He led a long campaign to save steelmaking at Shotton. It was so effective that the Downing Street press office complained that the government’s secretarial machine was being overwhelmed with letters from the paper’s readers.

“So many of us owe Peter a huge debt of gratitude for his guidance, support and encouragement in developing our careers. He could be a tough taskmaster, but he had a heart of gold.”

Peter, who had suffered ill-health for a number of years, died on 1 May at Wrexham Maelor Hospital.  A family service was held at Pentrebychan Crematorium, Wrexham on 13 May.