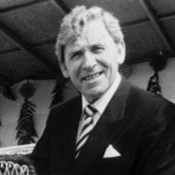 An editor who spent 12 years in charge of a regional daily has died aged 94.

Tributes have been paid to Peter Watson, who edited Aberdeen’s Press & Journal between 1975 and his retirement in 1987.

He later worked for the Weekly Journal before joining the P&J’s editorial staff in 1956, later serving as a sub-editor, motoring correspondent, features editor, assistant editor and deputy editor.

He told the newspaper: “As a north-east man who rose through the P&J’s ranks to the top job, Peter brought to the paper, as editor, the priceless asset of really knowing the grassroots of its circulation area.

“This was reflected in how he steadily built upon the already extensive local news output while also substantially expanding the paper’s features and sports coverage.

“One of the highlights of his career was being in the editor’s chair that unforgettable evening in 1983 when Aberdeen FC beat the legendary Real Madrid 2-1 in Gothenburg to lift the European Cup Winners’ Cup. Peter made damned sure that the readers were treated to page upon page of triumphal stories and pictures from the Swedish city.

“Debonair, urbane, very courteous and well-mannered, and much at ease with the good and the great, Peter excelled in a public relations capacity for the P&J and, indeed, Aberdeen Journals.

“He was an accomplished public speaker and conversationalist, with a fine turn of phrase, and very, very good company in any social setting.”

During his time in the editor’s chair, Peter not only met the likes of racing driver Jackie Stewart and then-Prime Minister Margaret Thatcher, but also oversaw the training of dozens of young writers.

Hamish added: “Peter was also a kindly, empathetic man who will be remembered with much gratitude and affection by all the young journalists in whose training and welfare he took such a keen, invaluable, career-furthering interest, and was delighted to follow the progress of many of them in subsequently very successful careers on the national newspapers and broadcasting stage.”

Peter, who died on 6 February, was married to Moira, who passed away in 2000.

The couple had two daughters, Pam and Hazel, five grandchildren and 11 great-grandchildren.

Pam told the P&J: “He was a proud Aberdonian and was extremely proud to have been the editor of the Press & Journal.

“There were 11 editions of the paper then and he enjoyed representing the city at press events.”