A regional daily has marked four decades of a sporting event synonymous with its patch.

Newcastle daily The Chronicle has celebrated the 40th anniversary of the first Great North Run.

The event was first run in 1981 after being devised by Olympic 10,000m bronze medallist Brendan Foster.

It returned for the first time since 2019 on Sunday after being cancelled last year due to the coronavirus pandemic. 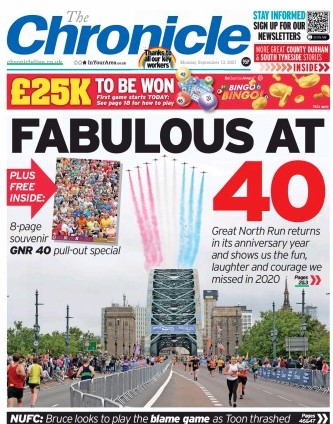 The Chronicle splashed on the anniversary yesterday with an image showing the course at the Tyne Bridge, with the Red Arrows flying above.

The newspaper ran with the headline ‘Fabulous at 40′ to complement the photograph.

Helen Dalby, audience and content director for Reach’s titles in the North East, told HTFP: “The Great North Run is the biggest event on Chronicle Live and The Chronicle’s calendar, and we pride ourselves on being a comprehensive source of information for all those running, spectating and visiting the region to take part.

“The race’s famous sights and sounds – from the Geordie nation turning out to cheer on runners to the emotional moment when the Red Arrows soar above the Tyne Bridge – perfectly sum up the North East’s passionate people and places. We really missed the Great North Run weekend last year, and know our readers did too.

“As well as compelling minute-by-minute live coverage on our website, It was fitting for both our daily newspapers to celebrate the 40th anniversary of such a special and important event for our region on the front pages and we also hope readers also enjoyed a special picture pull-out.”