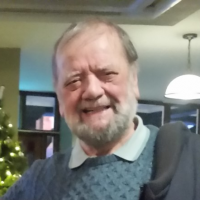 A regional print journalist who was headhunted to become a local radio station’s news editor has died aged 81.

Tributes have been paid to Chris Throup, who was poached by BBC Radio Nottingham from the Nottingham Evening Post and went on to “transform” the station’s newsroom.

He later worked for several years at The BBC Training Unit in London and went on to teach broadcast journalism at Nottingham Trent University.

Sky News’s Alex Crawford, who worked under Chris at Radio Nottingham, described him as “incredibly kind and helpful” to her and a “wonderful mentor” at the start of her career, while former station colleague John Holmes described him a “news legend”.

A native of Gloucestershire, Chris began his journalism career at the Stroud News & Journal in the late 1950s prior to moving to Nottinghamshire.

He first worked on weekly newspapers in Mansfield, before joining the Nottingham Post as a sub-editor.

In 1972 he was headhunted to joined the five-year-old Radio Nottingham as it expanded its newsroom operation and he later invited his lifelong friend John Barsby to help him lead the operation.

According to the National Union of Journalists, of which he was a lifelong member, his “pioneering work transformed the Nottingham newsroom, gaining it recognition and reputation for hard-hitting journalism and innovative broadcasting”.

In an obituary, the NUJ added: “Throughout his time with the BBC, Chris was an exceptional mentor for aspiring young journalists and talents.”

Chris took early retirement from the BBC in 1994 to care for his late wife Barbara.

Away from journalism, Chris enjoyed travelling the world and learnt to speak fluent Russian.

The NUJ obituary added: “He was a great storyteller, with a wonderfully dry wit, and a delightful sense of humour.

“He kept his mind alert by completing the crossword in The Times most days. He loved backgammon, Sudoku, and was an avid reader.

“Above all, Chris was a devoted family man. He is survived by three sisters, and a brother. He leaves his two children, Caroline and Stephen, and four grandchildren.”

The funeral of Chris, who had suffered a long illness, will be on 10 May but because of coronavirus restrictions, it will be a family-only affair.