A regional daily ran a front page “explicit content” warning after winning a fight to discover what would be included in a sex survey of schoolchildren.

Following what it called “countless calls and queries” to the Scottish Government, the Dundee Evening Telegraph has revealed the recommended content of a health and wellbeing census in which Scottish pupils as young as 14 will be asked about their sexual experience

Ultimately, local authorities will decide whether such questions are included in their versions of the survey, and Fife Council has already suspended the survey following the newspaper’s coverage of the issue. 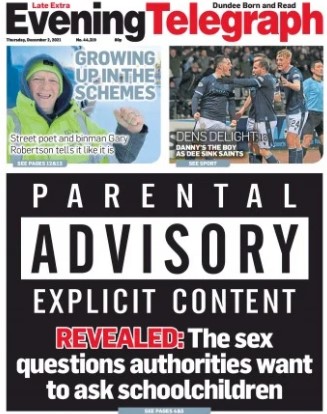 The revelation provided a splash for the Evening Telegraph on Thursday, pictured above, which is based on the ‘Parental Advisory’ label found on music records with explicit lyrics.

Editor Dave Lord told HTFP: “We had heard various concerns about a sex survey planned for pupils as young as 14, but finding out more turned into a bit of epic quest.

“The Scottish Government had a series of recommended questions, but it appeared to be up to local authorities what actually got asked.

“We even heard one council was going to refuse to put out the survey because they were so concerned.

“After countless calls and queries we finally secured a set of the recommended questions, but even then there was precious little clarity as to how the survey would be administered.”

The ‘Parental Advisory’ label was first introduced by the Recording Industry Association of America and was later adopted by the British Phonographic Industry.

Dave added: “When it came to illustrating the story, the last thing we wanted was a dull, generic pic, so we came up with the idea of the parental advisory sticker.

“It is bold, instantly recognisable and really got to the heart of the story in a very visual way – much more than any picture we could think of.

“The impact of the story has been considerable. One local authority has suspended the survey on the back of our coverage and the issue is also being raised in the Scottish Parliament.”