A regional daily has thanked readers on its front page after the newspaper raised £60,000 to help rough sleepers.

The Oxford Mail has revealed a campaign by the Oxfordshire Homeless Movement, which it backed, raised the cash of the course of the winter.

The money raised by the appeal will be used to start a new project for rough sleepers the Government legally cannot help, such as those who have pending asylum claims in the UK.

The campaign’s success provided a splash for the Mail last Monday, pictured below. 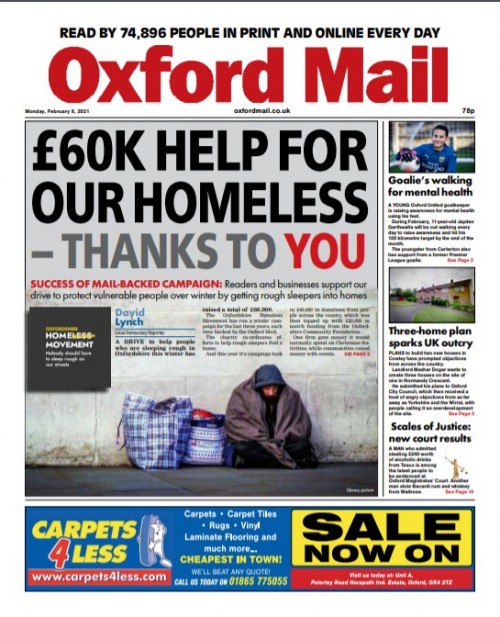 Editor Pete Gavan said: “It’s fantastic to see to such a large amount raised and shows the people of Oxford recognise the importance of the issue and how they could help.

“It’s great to see an appeal the Mail threw its weight behind being such a big success.”

OHM vice-chair Neil Preddy added: “We are delighted that the generosity of the local community is enabling us to begin this crucial project, which if successful could help bring about an end to rough sleeping in Oxfordshire altogether.

“It is an example of OHM’s work filling the gaps that others can’t, thanks to a partnership approach where we work together to understand the needs and create a viable solution.”